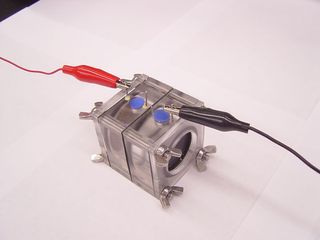 New technology could clean toxic messes from mines and create electricity at the same time.

Contaminated water seeping from coal and metal mines is a serious environmental hazard that endangers the safety of drinking water supplies and the health of plants and animals. This caustic pollution—loaded with metals such as arsenic, lead, copper, iron and cadmium—is currently difficult and costly to treat.

Environmental engineers at Pennsylvania State University are now developing a device that could both fight this environmental problem and provide a new source of energy.

The researchers tested a lab-scale version of their invention on fluids tainted with iron, similar to polluted water from mines. The device attacked the dissolved iron, removing electrons from it. This generated electricity while at the same time making the iron insoluble, thus efficiently pulling this contaminant from the water.

The iron that the device recovered could find use as a pigment for paints or other products, the researchers said. In principle, such a machine could also pull other metal contaminants from polluted water. "We are also working, in other research projects, on removal of arsenic and other contaminants," researcher Brian Dempsey said.

So far the device only generates a modest amount of energy. A fridge-sized version "might light up a small incandescent bulb," researcher Bruce Logan told LiveScience. Still, the researchers hope to significantly improve power output in future versions, as well as bring down costs. "It's an exciting start," Dempsey said.

The researchers detailed their findings in the Dec. 1 issue of the journal Environmental Science & Technology.