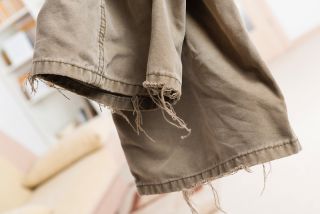 It's generally not a good idea to smear squid parts all over your outfit, but one day, clothes could fix their own rips with the help of coatings made of squid proteins, according to a new study.

This research might lead to more than just everyday self-healing clothes. It could also help create garments that are tailored for protection against chemical and biological warfare agents and that can repair themselves, the researchers added.

Rips and tears in shirts or jeans are usually no big deal — you can either repair the clothes or simply throw them away — but damage to items such as hazmat suits or biomedical implants can be a matter of life or death. As such, for years, scientists have explored self-repairing films that could boost the lifetimes of these types of products. [Gallery: Futuristic 'Smart Textiles' Merge Fashion with Tech]

While previous self-repairing films could work quickly, they often had weaknesses; for instance, some cracked under warm, dry conditions. As such, researchers in the new study wanted to find a more versatile material to use, they said.

The scientists investigated molecules that came from the suction cups on squid tentacles for use in self-repairing films. Specifically, the scientists focused on proteins from razor-sharp, tooth-like structures around the openings of these suction cups that help squid latch onto and take down prey, the researchers said. Previous research suggested the proteins from these "squid ring teeth" are tough and elastic under both wet and dry conditions.

The scientists developed a coating that contained the squid ring-teeth proteins. When a fabric covered in this coating is soaked in water, the proteins diffuse toward holes and tears in the coating, linking segments of coating and fabric together to make repairs, said study co-senior author Walter Dressick, a chemist at the U.S. Naval Research Laboratory in Washington, D.C.

The researchers experimented with different types of cloth, applying the proteins to cotton, linen and wool sheets. They dipped the fabrics in the new coating and then cut holes in the cloth. The scientists next immersed these sheets in water and pressed patches made of the same coated fabrics against these holes, which successfully healed the damage.

"We were surprised at the rapidity of the healing process and the strength of the healed materials," said study co-senior author Melik Demirel, a materials scientist at Pennsylvania State University in University Park.

Future applications of this work could include a detergent-like solution that can be added to washing machines to help self-healing clothes repair themselves, the researchers said. "The centrifugal force on the tumbler may provide enough force for the required pressure of self-healing," Demirel added. [Top 10 Inventions that Changed the World]

However, "there is still a lot of work to do before self-repairing clothes will appear in your local department store," Demirel said. The cost of the material is still an issue. However, expense shouldn't be a barrier once the scientists figure out how to scale up the manufacturing process "to meet anticipated commercial needs," Demirel said.

Large-scale production of the squid protein is the next step, he said. This and similar self-healing materials may find uses in clothing and biomedical implants, but also for "biodegradable gels for wound healing in the near future," Demirel said.

The researchers have also developed synthetic genes to create squid ring-teeth proteins. Future research with these genes can help scientists analyze the properties of the proteins and create variants to add qualities for specific applications, Demirel said.

The scientists detailed their findings Aug. 10 in the journal ACS Applied Materials & Interfaces.