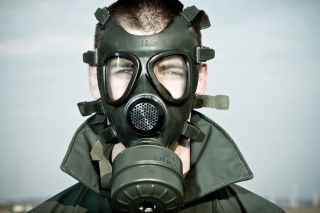 A gas mask may not be practical for most people, even in the event of a chemical or bioterrorism attack.
(Image: © melis | Shutterstock.com)

As the civil insurrection in Syria escalates, and the Obama administration considers military action against the government of Syrian President Bashar al-Assad, some of Syria's neighbors are concerned they may become the victims of a poisonous gas attack.

Many international observers believe the Syrian government has used some kind of poisonous gas against opposition forces and civilians in recent weeks, and senior White House officials have evidence that the poison used was sarin gas, the Wall Street Journal reports. Syria is widely credited with having a large store of chemical weapons at its disposal, including some 1,000 tons (907 metric tons) of nerve gas, Israel-based news site The Tower reports.

In response to these threats, demand for gas masks in Israel has increased dramatically in recent weeks — 62 percent of Tel Aviv residents now have gas masks, according to The Tower, while 75 percent of the residents of Kiryat Shmona (situated near the Israeli-Syrian border) have a gas mask. [Fight, Fight, Fight: The History of Human Aggression]

Depending on their type and construction, gas masks can be effective against a wide range of substances, from ordinary dust and pollen to poisonous gases — including nerve gases (such as sarin and organophosphate pesticides) that act on the central nervous system.

Inexpensive face masks, like the disposable paper-filter masks available in hardware stores, are effective only against airborne particles. These masks are rated by the amount of particles they can filter: A mask rated 95 will stop 95 percent of airborne particles that are 0.3 microns in size and larger, while a mask rated 100 will filter out 99.97 percent of particles 0.3 microns and larger, making it comparable to a HEPA (high-efficiency particulate air) filter. (The average human hair is 70 micrometers in diameter.)

Paper-filter masks, however, are useless against most chemicals, whether paint fumes, sarin gas or airborne organophosphates. Those threats require a mask with activated carbon, also known as activated charcoal.

Charcoal bonds with the active ingredients in nerve gas and other chemical threats, effectively filtering those toxic compounds out of the air inhaled by the mask's wearer. As long as there's space on the charcoal filter's fibers for incoming toxins, the wearer is safe.

But after a period of time — depending on the density of toxic chemicals in the air, the wearer's rate of breathing and other factors — an activated charcoal filter will stop working and will need to be replaced. Most activated charcoal masks have disposable filters that are easily replaced. [End of the World? Top Doomsday Fears]

There are other limits to the effectiveness of these masks: They don't always provide eye protection, and any mask is only as good as the seal around the wearer's face — a leak or a weak seal would render them useless.

That's why many professionals, including hazmat teams and emergency first-responders, wear full-face masks that are connected to an air supply, such as a small air canister or a scuba-style air tank. Use of these bulky, heavy masks and tanks, however, requires more training than most civilians have had.

Because of their limitations, Ready.gov — the disaster-preparedness website developed by the federal government — doesn't recommend the use of any gas masks. "The use of gas masks and hoods by the public during a chemical threat is not recommended due to legitimate safety concerns," according to the site. "Improper use of masks and hoods as well as a false sense of security as to their effectiveness could pose a threat to public safety."

Indeed, many public health experts cast doubt on the effectiveness of gas masks in the event of a widespread chemical or bioterrorism attack. "I believe individuals buying gas masks to protect themselves against an unspecified biological or chemical attack is pretty useless," Dr. John Clements, professor of immunology and microbiology at Tulane University in New Orleans, told ABC News.

And in the case of a biological agent like anthrax, a mask might prove useless. "The infection takes one to six days to start showing symptoms, and you are not going to be aware that you were exposed for some time," Clements said.

Additionally, most gas masks aren't readily available in the correct size for small children, don't always fit the faces of men who have facial hair, and can't be used if the wearer uses eyeglasses.

Nonetheless, residents of Israel and other Middle Eastern nations are preparing for the worst: Israeli post offices, which distribute gas masks, reported a 300 percent increase in requests for gas masks in recent days, following the alleged gas attack in Syria, the Times of Israel reports. Israelis have also participated in recent government-coordinated defense drills and other preparedness exercises.