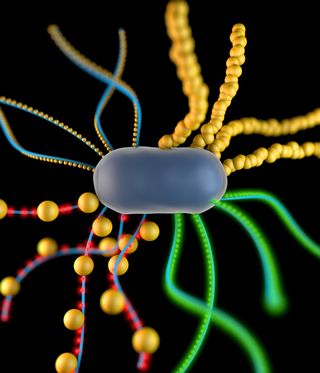 Why bother to manufacture materials if you can grow them organically?

Researchers have produced "living" materials by nudging bacteria to grow biological films. In turn, this process could lead to the development of more complex and interactive structures programmed to self-assemble into specific patterns, such as those used on solar cells and diagnostic sensors, and even self-healing materials that could sense damage and repair it, a new study finds.

"In contrast to materials we use in modern life, which are all dead, living materials have the ability to self-heal, adapt to the environment, form into complex patterns and shapes, and generate new functional materials and devices from the bottom up," said study lead author Timothy Lu, a biological engineer at the Massachusetts Institute of Technology.

Such "living materials" are essentially hybrids that have the best of both worlds: the benefits of both living cells, which can organize and grow on their own, and nonliving materials, which add functions such as electricity conduction or light emission. [Biomimicry: 7 Clever Technologies Inspired by Nature]

For instance, other researchers have looked at the possibility of organizing viruses into new materials. But Lu said his team's approach is different. "Previous systems do not leverage the characteristics of living organisms," he told Live Science. "Also, most modern materials' synthesis processes are energy-intensive, human-intensive endeavors. But we're suggesting to use biology to grow materials from the bottom up in an environmentally friendly fashion."

To create the materials, Lu's team took inspiration from natural materials, such as bone and teeth, which contain a mix of minerals and living cells. Bones grow when cells arrange themselves into specific patterns and then excrete special proteins to produce the calcium phosphate structures.

Lu's team tried to do the same by reprogramming Escherichia colibacterial cells using genetic engineering to produce the proteins.

E. colinaturally produce biofilms that contain a special type of protein called curli fibers that help the bacteria attach to surfaces, and are known to have the strength of steel. Each curli fiber is composed of a chain of identical protein units called CsgA, which can be changed by adding protein fragments called peptides. These peptides can capture nonliving materials, such as gold nanoparticles, and incorporate them into the biofilms.

The researchers' goal was to get the bacteria to secrete the protein matrix in response to specific stimulants.

To do so, the researchers disabled the bacterial cells' natural ability to produce CsgA and replaced it with an engineered genetic code that produces CsgA proteins only under certain conditions — when a molecule called AHL is present.

The scientists could then adjust the amount of AHL in the cells' environment, and when AHL was present, the cells produced CsgA, making curli fibers that merged into a biofilm.

The team then modified E. coli in a different way, to make it produce CsgA with a specific peptide with many histidine amino acids, but only when a molecule called aTc was present.

"This allowed us to control the materials that were made by the bacteria using external signals," said Lu. Just by increasing or decreasing the amount of AHL and aTc in the modified E. coli's environment, they were able to modify the production and composition of the resulting biofilms.

The team then modified the proteins to make inorganic materials, such as gold nanoparticlesand quantum dots, to grow on the biofilms. By doing so, the researchers engineered self-growing E. coli biofilms that could conduct electricity or emit fluorescence.

The researchers also modified E. coli so the cells could "talk" to each other and coordinate the formation of materials whose properties change over time, without requiring human input. "Ultimately, we hope to emulate how natural systems, like bone, form. No one tells bone what to do, but it generates a material in response to environmental signals," Lu said. [Bone Basics: 11 Surprising Facts About the Skeletal System]

"One can imagine growing materials using sunlight rather than needing to have very energy-intensive processes for top-down materials' synthesis," he added.

Lu also envisions living cellular sensors that change their properties when they detect specific environmental signals, such as toxins.

Finally, by coating the biofilms with enzymes that catalyze the breakdown of cellulose, this work could lead to materials that convert agricultural waste into biofuels.

The research is not limited to E. coli. "We are considering the use of photosynthetic organisms and fungi as other fabrication platforms," Lu said. "In addition, we have only demonstrated the interface of biology with gold and semiconductor nanocrystals, but there are many other materials that can be interfaced."

Ahmad Khalil, a biomedical engineer at Boston University who was not involved in the study, applauded the work.

"This work presents, to my knowledge, one of the first demonstrations of using synthetic biology approaches to rewire or engineer these cellular mechanisms to precisely control how inorganic materials are assembled or synthesized on a molecular bio-template, thus providing an avenue for genetically encoded materials engineering," Khalil told Live Science.

The study was detailed in the March 23 issue of the journal Nature Materials.