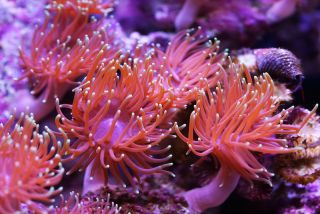 When it comes to creatures with keen hearing ability, sea anemones are not at the top of the list. Nonetheless, new research suggests that certain proteins that help these animals repair their feathery tentacles could also eventually be used to help repair damage to cells within a mammal's inner ear.

The finding comes from a study done in mice and could be an early step toward finding a treatment for people with hearing loss, the researchers said.

In mammals, including humans, sound is translated from vibrations in the air into nerve signals that can be sent to the brain by highly specialized cells called hair cells. These are found within the cochlea, a fluid-filled structure of the inner ear. Damage to these hair cells, which can be caused by exposure to loud noise, can result in hearing loss, and mammals are not able to repair hair cells once they are harmed. [Marine Marvels: Spectacular Photos of Sea Creatures]

It turns out that sea anemones have similar hair cells on their tentacles, which the animals use to sense ocean vibrations and approaching predators, according to a statement from the Journal of Experimental Biology, which published the new study on Aug. 3.

Previous research showed that after anemones reproduce — which they do by tearing themselves in half — they repair their tentacles, and their hair cells, using repair proteins in the mucus that coats the creatures' bodies, according the statement.

"It occurred to me that if any animal could recover from damage to its hair bundles, anemones would be the ones," study author Glen Watson, a biology professor at the University of Louisiana at Lafayette, said in the statement.

Watson and his colleagues identified a group of secreted proteins that allowed the anemone hair cells to recover, and wondered if those same proteins could also repair damaged hair cells from a mouse's ear, Watson said. [7 Medical Myths Even Doctors Believe]

To investigate this, the researchers first removed the cochleas from mice, and treated the organs with a solution that damaged the hair cells. Specifically, the solution damaged the tiny, hair-like structures called stereocilia on the surfaces of those cells in the way that loud noise would.

Next, the researchers treated the cochleas with a solution of repair proteins isolated from starlet sea anemones that had damaged tentacle hair cells. Results showed that the mouse stereocilia "recovered significantly," the statement said.

Mice have proteins that are related to the sea-anemone repair proteins, the researchers found. They hypothesized that in the future, it might be possible to harness those proteins to repair mammalian hair cells.

However, much more research is needed first, to see whether the proteins work the same way in people, "putting this sort of therapy years into the future," Watson told Live Science.