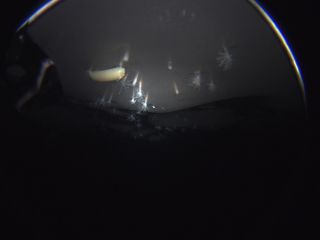 A new species of sea anemone, Edwardsiella andrillae, is observed living anchored in the ice at the underside of the Ross Ice Shelf, Antarctica--one anemone with an unidentified organism, nicknamed the "eggroll" holding on to it.
(Image: © Dr. Frank R. Rack, ANDRILL Science Management Office, University of Nebraska-Lincoln)

A robot surveying the underside of Antarctica's Ross Ice Shelf has made a startling discovery: Clinging upside-down from crannies in the ice shelf with their tentacles dangling into the icy water were thousands and thousands of tiny sea anemones.

The creatures are a new species dubbed Edwardsiella andrillae. Other anemones have been found in Antarctica, but these are the first reported to live in the ice. The tiny, white invertebrates reside in burrows in the ice and extend their tentacles to filter-feed from the water below.

The finding, detailed in the December 2013 issue of the journal PLOS ONE, was a complete surprise.

"When the robot got down, the engineers noticed the ice looked kind of fuzzy, and when it drifted up to take a look they saw anemones, and knew it was really something special," said Frank Rack, science leader of the Antarctic Geological Drilling Program at the University of Nebraska-Lincoln. Other groups have drilled through Antarctic ice shelves before, he said, "but nobody looked up." [Gallery: Unique Life at Antarctic Deep-Sea Vents]

The team's actual mission was to survey ocean currents near the Ross Ice Shelf, a slab of ice extending more than 600 miles (970 kilometers) northward from the grounding zone of the West Antarctic Ice Sheet into the Ross Sea, to model the behavior of a drill string, a length of pipe extending to the seafloor which delivers drilling fluids and retrieves sediment samples. The work is part of a larger effort to study what Antarctica was like before its glaciers formed.

Rack and his team drilled a hole through the 890-foot-thick (270 meters) ice shelf and lowered down a robotic vehicle known as the SCINI ROV (Submersible Capable of under-Ice Navigation and Imaging - Remotely Operated Vehicle) on a tether. The robot contained two cameras: one that looked forward and one that normally faced down.

Swimming upside down, the robot trained its cameras on the anemones, which seemed to be glowing. The anemones probably feed on detritus and the upwelling of nutrient-rich water. The ice under the front of the shelf is melting at a rate of about 3.3 feet (1 meter) per year, so the creatures must be burrowing to stay inside the ice, Rack said. Scientists don't really know how far the creatures extend, but it could be hundreds of miles.

The researchers used hot water to stun the anemones and improvised a device to suck them out of their burrows and retrieve them to be studied. Unfortunately, they didn't have the proper equipment to preserve the animals for genetic analysis, Rack said.

But anemones aren't the only creatures living in this dark, icy world. The researchers also found fish that swim upside down, marine worms that live in the icy melt, crustaceans called amphipods and a strange creature resembling a sea cucumber, which they nicknamed "the eggroll."

"What started out as an engineering test of the remotely operated vehicle during its first deployment through a thick ice shelf turned into a significant and exciting biological discovery," Rack said in a statement.

The team plans to apply for funding to return to the ice shelf with a more advanced robot that could go farther under the ice, all the way to the seafloor.

The ANDRILL mission was funded by the National Science Foundation and the New Zealand Foundation for Research.

Editor's Note: This article was updated at 10:33 a.m. ET Jan. 23. The researchers will be lowering a drill strill into the seafloor, not a pipeline, and the rate the Ross Ice Shelf is melting is 1 meter per year, not 1 millimeter.