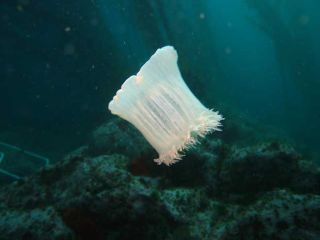 This may be another new species of anemone discovered off the Aleutian Islands. Photo by Heloise Chenelot, University of Alaska Fairbanks

Sea anemones normally anchor themselves to the seafloor. But new species found lurking in the waters surrounding the windswept Aleutian Islands near Alaska swim and walk across the sea floor.

Scientists discovered the anemones, which could represent two species, as well as a new species of kelp as part of a two-year scientific survey of the waters around the Aleutians.

"Since the underwater world of the Aleutian Islands has been studied so little, new species are being discovered, even today," said Stephen Jewett, a marine biologist at the University of Alaska, Fairbanks, and the dive expedition leader.

Overall, scientists say only about 10 percent of the species of life on this planet have been seen or catalogued.

The researchers are consulting experts to verify that the Aleutian anemones are in fact new species, but the consensus so far is that they are. Sea anemones are animals that typically use a foot to anchor to rocks. Some are known to detach when attacked or if their environment changes and food becomes scarce. The new species likely belong to a class of anemones that can detach and drift with ocean currents.

The kelp, dubbed Aureophycus aleuticus, is a type of brown algae that might represent a new genus, or even family (a larger biological classification that can include more than one genus), of the seaweed. Up to 10 feet long, the kelp was discovered near thermal vents in the region of the Islands of the Four Mountains.

Jewett and his team are studying the Aleutian waters to gauge the overall health of the islands and life there. Already, the team found evidence that the rugged and remote islands are not immune to human activity.

"Pollutants traveling through air and water pathways from temperate latitudes have been showing up in the area," Jewett said. "Debris and oil spills from World War II in the Aleutians have left their mark behind in unexploded ordinance and local sources of pollutants."

The team is analyzing water samples collected during dives for nutrient and oxygen levels, acidity, temperature and radioactive chemicals left over from underwater nuclear tests conducted at Amchitka Island between 1965 and 1971.

"Climate change, with changes in water temperature, wind patterns and currents, may impact the region's biological life," Jewett said. "It is important that we collect this information before any major changes occur."