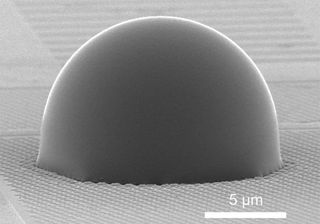 A new "superlens" is so powerful that it could help researchers zero in on germs that were too small for microscopes to spot until now, according to a new study.

For centuries, microscopes have helped scientists make major discoveries, such as proving the existence of microbes. However, the physical laws governing light restrict conventional lenses in an important way: They can only focus on items that are no smaller than half the wavelength of the light that is used to see these objects. This means that regular lenses in traditional optical microscopes are limited to examining items that are about 200 nanometers (or billionths of a meter) in size and above — about the size of the smallest known bacteria.

In the past decade or so, researchers have developed so-called "superlenses" that have broken this size limit. However, until now, scientists have had trouble fabricating a superlens that had the right materials and structure to work with visible light. [Magnificent Microphotography: 50 Tiny Wonders]

The new superlens consists of millions of spherical beads of titanium dioxide. Each bead, which is only 15 nanometers wide, is applied onto the material that the researcher wants to view. Similar titanium-dioxide nanoparticles are now often found in sunscreen products and white paint.

The size, shape and material that make up these particles, and their position relative to each other, help them work together to act like a lens, magnifying features that have previously been invisible to normal lenses.

"Each sphere bends the light to a high magnitude and splits the light beam, creating millions of individual beams of light," study co-author Zengbo Wang, a physicist at Bangor University in Wales, said in a statement. "It is these tiny light beams which enable us to view previously unseen details."

All in all, this superlens can increase the magnification of existing microscopes by a factor of about five. In experiments, the scientists could produce sharp images of items that are 45 nanometers in size.

"Our superlens can be used to visualize live viruses or germs that were previously invisible," Wang told Live Science. "This would allow researchers to study, for example, the interaction of medicines with live viruses in real time."

The researchers noted that one major advantage of their superlens is that titanium dioxide is cheap and readily available. Another is that the superlens could be applied to whatever the person wants to view, which means that a scientist would not have to buy a new microscope.

Future work will focus on "how to make this technique find solid, practical applications," study co-author Limin Wu, a materials scientist at Fudan University in China, told Live Science. Another direction for research is to increase the resolution further by using even smaller nanoparticles, Wang said.

The scientists detailed their findings online today (Aug. 12) in the journal Science Advances.