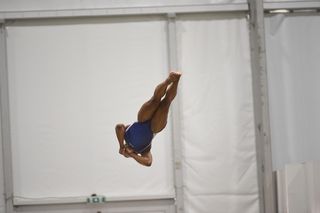 It turns out, the amount Olympians eat can vary tremendously depending not only on the events they're competing in, but also their body type and lifestyle outside the Olympic arena. The average Olympic shooter, for instance, may have very different caloric needs than a swimmer like Michael Phelps.

From weightlifting to table tennis, here's what the world's best athletes eat to power their amazing athletic feats. [Going for Gold: 7 Olympic Secrets for Success]

Most people probably wouldn't consider the task of aiming, pointing and shooting to be physically arduous. But it turns out that those at the highest echelons of shooting (the Rio Olympics includes rifle, pistol, shotgun and total shooting events) still need to carefully plan their diets.

The USA Shooting team is told to eat a low-fat diet with a mix of simple and complex carbohydrates and a moderate amount of protein, to prevent sugar crashes that could interfere with these competitors' laser-like focus and cognition. Elite shooters are also told to stick to clean living and to stay away from caffeine, cigarettes and booze, again because these substances could interfere with the shooters' thinking, according to USA Shooting's nutritional guidelines.

However, the ideal and the practice in the sport may be very different. Three-time shooting gold medalist Kim Rhode told the New York Times that Olympic shooters are typically the ones having "caffeine and drinking stuff to be more amped up to react to the target."

All that mental concentration could also burn a few extra calories.

"The brain is the organ in the body that uses a lot of calories," Clark told Live Science. "When people are really thinking hard, they're very tense or anxious, and that tension can increase calorie needs," though the differences in calorie burn aren't dramatic, she said.

That also means athletes may need different amounts of calories on race or game day versus during training, she added.

Gymnasts like Biles and Aly Raisman launch themselves into the air and then flip and twist two or even three times before coming down to Earth.

But despite those amazing feats of prowess, these athletes aren't usually chowing down at the dinner table. Gymnasts benefit from tiny, muscular frames to generate the explosive power of a full-twisting double layout or an Amanar vault, but every extra ounce of body weight also makes it harder to get airborne, former Junior Olympic gymnast and nutrition coach Gina Paulhus told Bodybuilding.com.

What's more, although their routines involve explosive bursts of energy for a minute or two, there's also a lot of standing around waiting for their turn on the equipment, both during training and during meets. For instance, a 4-hour gymnastics workout burns just 1,000 calories, far less than the 2,400 calories burned during a brisk, 4-hour jog, according to Harvard Medical School.

As a result, gymnasts have earned a reputation for having highly restrictive diets, and for sometimes struggling with eating disorders.

"It's tough when you're in a sport that is judged on appearance," Clark said. "And many of those gymnasts are in bodies that it takes a lot of effort to keep."

For instance, former gymnast Dominique Moceanu told The New Yorker that former coaches Bela and Marta Karolyi put her on a diet of 900 calories a day.

Biles seems to have fewer restrictions, eating foods such as pork chops, chicken sandwiches and even the occasional soft drink, according to that article.

The ideal diet for a gymnast is one that contains at least 2,000 calories and is low in fat, high in complex carbohydrates and high in fiber, according to USA Gymnastics. In other words, to power those gravity-defying tumbling passes, Biles probably isn't eating much more than you or I. (The average woman should typically consume no more than about 2,000 calories per day, while the average man should consume about 2,400 calories a day, according to the Centers for Disease Control and Prevention).

"They ride, and they just eat," Clark said.

Although the ideal diet is one full of minimally processed foods, healthy whole grains, fruits and veggies, not all elite athletes are consuming such healthful fare.

In his book "Faster than Lightning: My Autobiography," (HarperSport, 2014) Usain Bolt, the "world's fastest man," said he subsisted at the 2008 Beijing Olympics almost exclusively on chicken nuggets, french fries and McDonald's apple pies, gobbling up about 1,000 nuggets during his 10-day stay. Of course, not every elite athlete is nugget-powered: The nine-time gold-medal winner Carl Lewis said he won most of his Olympic medals while sticking to a vegan or vegetarian diet.

Moving a tiny paddle to fling a feather-light ball across a miniature table — what could be hard about that?

It turns out that at the highest levels, table tennis is quite physically demanding.

The average pro can burn anywhere from 300 to 800 calories per hour during training, and athletes may undergo two training sessions daily, of 2 or 3 hours each, said Richard McAfee, the USA Table Tennis national coach, and Hall of Fame inductee.

On match days, players typically burn between 300 and 500 calories per match, and play two or three matches per day, McAfee told Live Science in an email.

Because the play for each point lasts just 3 to 5 seconds, players rely mostly on a kind of high-intensity energy-generation system called the alactic anaerobic system. [Infographic: How Your Body Uses Energy]

"So it is best described as playing a chess match while running a series of 40-yard dashes," McAfee said.

According to the International Table Tennis Foundation's nutritional guidelines, players should eat about twice as many grams of carbohydrates as fat and protein, he said.

Three fried-egg sandwiches, a five-egg omelet, one bowl of grits, maize porridge, three slices of French toast with powdered sugar and three chocolate chip pancakes on the side.

Though it sounds like such a feast could feed several people, this was a typical training breakfast for just one person: the now 22-time Olympic swimming medalist Phelps, during the 2008 games, according to his fan site.

Throughout the day, Phelps powers his workouts by drinking energy-dense nutritional shakes and mind-boggling quantities of food. Based on his self-reports, his diet racks up about 12,000 calories a day, to power his 5-hours-a-day, six-day-a-week training regimen.

But whether it's 6,000 or 12,000 calories, there's no doubt that the intense aerobic activity required for swimming burns a lot of calories, she said.

Ultimately, the diets of Olympians are affected not only by the demands of their sports, but by everything else in their lives: Do they have a part-time job where they surf the web all day? If so, their caloric intake may not be much higher than the average person's, Clark said.

Are they tiny or humongous? Are they at their natural size, or are they trying to lose weight to qualify for a lower weight class?

"Runners and triathletes might be dropping weight and being really strict with calorie intake, whereas other people are just eating it and burning it," Clark said. "There are so many variables that it's hard to say how many calories people need."

Ultimately, athletes will do best if they listen to their bodies, she said.

"The body is the best calorie counter, and these top athletes — they're able to listen to their body," Clark said.