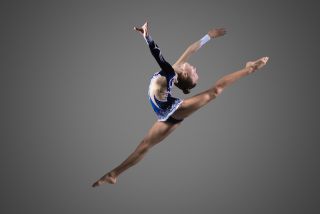 Gymnasts can do handsprings, splits, and flips with double twists — extraordinary feats of flexibility and strength that make their sport one of the most popular to watch during the Summer Olympics.

But how are these athletes so incredibly flexible? Live Science spoke with Dr. Timothy Miller, an associate professor of orthopedic surgery and sports medicine at The Ohio State University Wexner Medical Center, to learn more.

First off, it's important to note the gymnasts' ages, Miller said. Generations ago, Olympic female gymnasts were in their 20s and 30s, but that changed after 14-year-old Romanian gymnast Nadia Comaneci won three gold medals (along with one silver and one bronze) at the 1976 Montreal Summer Olympics, according to Live Strong. [What Exactly Is the Olympic Tradition?]

When a wave of younger gymnasts entered subsequent games, the International Federation of Gymnastics increased the age requirements, mainly because of health concerns for the girls, Live Strong said. Nowadays, female gymnasts must be at least 16 years old in the calendar year in which the Olympics are held to compete in the games. But unlike in the old days, most gymnasts are still quite young, usually between the ages of 16 and 22, Miller said.

This age range is no coincidence. Younger women are more flexible than older women for a number of reasons, he said.

For instance, a woman's main reproductive years are between ages 14 and 30, Miller said. During that time, they have more relaxin hormone, which gives soft tissues, such as ligaments and tendons, increased flexibility.

Female gymnasts tend to have smaller, more agile bodies because they exercise at intense levels, which tends to delay puberty. For instance, when she was 13 years old, Jordyn Wieber (a now-retired American gymnast who won a gold medal at the 2012 Summer Olympics) trained for 30 hours a week, according to an interview she did with USA-Gymnastics.org.

Puberty is delayed in young athletes, in part, because the body needs a certain amount of fat to go through puberty, which these young athletes don't have because they burn so many calories, said Dr. Sabrina Strickland, a sports medicine surgeon at the Hospital for Special Surgery in New York City. Moreover, many young gymnasts develop eating disorders, which also stunt growth, Live Strong reported.

Puberty in girls leads to a growth spurt and weight gain, both of which are delayed in many gymnasts, Strickland said. She recalled one girl who stopped gymnastics training at age 11, and rapidly grew 3 inches (7.6 centimeters).

But for gymnasts, short stature is an advantage. It gives them a lower center of gravity, which sits at the midpoint of the body. If their center of gravity is lower, that means it's closer their base of support (i.e. the legs), making it easier to balance on beams, according to Live Strong.

Moreover, gymnasts who have a high strength-to-mass ratio (that is, they don't weigh much, but they're strong for their build) excel at whole-body rotations, according to a 2003 study in the journal Sports Biomechanics.

"Larger gymnasts, while able to produce more power and greater angular momentum, could not match the performance of the smaller ones," the researchers wrote in the study.

People's joints typically stiffen with age, often from overuse or from a gradual progression of arthritis, a condition in which the joints become inflamed, Miller said. Sometimes, people with joint damage develop bony growths called bone spurs around their joints, which limit their ability to move, he added.

But younger gymnasts often have fewer injuries — including fractures, stiffness and bone spurs — than older gymnasts do, Miller said. The reason is fairly simple: Younger athletes haven't been around long enough to accumulate them, he said.

Moreover, female gymnasts are flexible because of their rigorous training regimens, which include tons of exercise, including stretching, cardio, core conditioning and drills. Because of their young age and constant exercise, they have more "organized" collagen — a protein found in connective tissue — compared with older people and people who don't exercise.

Organized collagen forms when the body lays down collagen in a uniform and linear pattern, which, in turn, gives collagen strength and increased flexibility, Miller said. But as people age and exercise less, their collagen becomes disorganized, Miller said.

"In other words, it is laid down in a way that is more haphazard when you look at it under a microscope, as opposed to linear," Miller told Live Science. This disorganized collagen can increase a person's risk of injury, such as ligament tears, he added. [The Twisted Physics of 5 Olympic Sports]

People don't have to be gymnasts to be extremely flexible. Those with generalized ligamentous laxity, which is sometimes known as being "double-jointed," and people with Ehlers-Danlos syndrome, a condition in which the connective tissue is very flexible, are also quite limber, Miller said. However, these conditions also come with risks.

"Sometimes, if you're too flexible, they [the conditions] can predispose you to getting shoulder dislocations or kneecap dislocations or recurrent ankle sprains because the tissues are just not quite stiff enough to maintain stability of the joint."