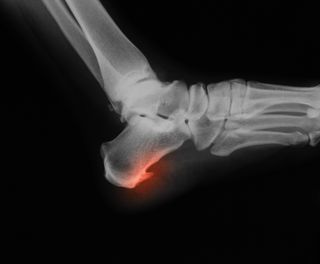 Donald Trump received a draft deferment during the Vietnam War because a doctor diagnosed him with bone spurs in his heels, The New York Times reported yesterday.

Bone spurs are bony outgrowths that develop on the edges of a person's bones. When these growths occur on a person's heel, they tend to come from the front of the heel bone, along the bottom of the foot, in the direction of the arch of the foot, according to the Mayo Clinic.

People can be born with heel spurs, or the growths can form later in life, said Dr. John G. Kennedy, a foot and ankle surgeon at Hospital for Special Surgery in New York City. Kennedy has not treated Trump. [16 Oddest Medical Cases]

The condition can be painful if the heel spurs are large, Kennedy told Live Science. A person would experience pain in the sole of his or her foot while walking or exercising, Kennedy said.

Although one in 10 people has heel spurs, the condition causes pain in only half of the people who have it, or one in 20 people, according to the American Academy of Orthopedic Surgeons.

Indeed, not everyone with heel spurs even knows that they have the condition, according to the Mayo Clinic. Oftentimes, people learn that they have heel spurs when they get an X-ray for a different problem, Kennedy said.

To treat heel spurs, doctors recommend that people change their footwear, Kennedy said. If people wear the right shoes, most heel spurs will stop causing pain, even though the spurs themselves don't go away, he said. Heel spurs can also be surgically removed, but this is very rarely done, he said.