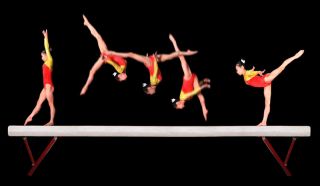 Olympic gymnasts must concentrate not just on physical prowess, but phsics itself, to achieve their complex tumbles.
(Image: © Jiang Dao Hua, Shutterstock)

With the 2012 Summer Olympics well under way in London, the eyes of the world are watching the extreme athleticism exhibited by the competitors. But in addition to sports skills, the Olympians competing this year can be considered practical physicists, as well.

After all, to win a swim race by fractions of a second, or spin around four times after bouncing off a vault, the ability to harness physics principles such as angular momentum and hydrodynamics is as important as muscle memory and strength.

Here are five Olympic sports where physics makes all the difference:

Olympic swimming races are often decided by tenths or hundredths of a second. With a margin like that, the tiniest details that affect a swimmer's speed can make the difference between winning and losing. Swimmers must do everything they can to reduce the water resistance against their body as they propel forward.

Resistance will increase with the surface area exposed to the water, so the more streamlined a swimmer can make her body, the quicker she will go. The smoother this surface is, the better, as well. That's why swimmers often shave all their body hair, wear swim caps to cover their heads, and cover much of their bodies with specially designed swimsuits that mimic shark's skin or other surfaces for greater hydrodynamics. [Summer Olympics Science: Making Swimmers Faster | Video]

Swimmers must also think about buoyancy, the force that keeps them afloat. Because water is more resistant to movement than air, it is in athletes' best interests to swim as close to the surface as possible so that more of their bodies are exposed to the less resistant air than to the dragging water.

The principle of angular momentum is immediately apparent when watching Olympic gymnasts spin and twirl, aiming to win higher scores by packing in more rotations.

All objects spinning around a point have a quantity called angular momentum that depends on the object's mass, speed and how spread out it is around its center of gravity. Unless some outside force interferes with the system, its angular momentum will be conserved. Thus, a gymnast can spin faster by pulling in his arms and legs as tightly as possible, thus reducing the space over which his mass is spread out. In response, the gymnast's speed will increase to make up the difference and keep his total angular momentum constant. [6 Weird Facts About Gravity]

Newton's third law of motion also plays a great role in gymnastics. The law states that for every action, there is an equal and opposite reaction. Gymnasts take advantage of this by pushing hard against the floor, the balance beam or the vault, so that these surfaces push back hard against them, giving them lift into the air.

Olympic divers aim to do gorgeous twists and turns in the air, and then glide as seamlessly into the water as possible. The bigger the splash made going in, the larger the deduction taken from a diver's score.

Divers also take advantage of Newton's third law. By jumping down on the diving board as hard as possible, divers can cause the board to push back up on them, giving them a larger vertical velocity to spring high into the air. The more time in the air, the more time a diver has to complete her somersaults.

As divers near the water, they try to line their bodies up as vertically as possible, with arms and legs streamlined into a thin pole.

"The reason why they want to enter the water vertically is that they're going to go into the water and bring all of that water down with them," explained University of Southern California Dornsife professor of biological sciences and biomedical engineering Jill McNitt-Gray in a video on the physics of diving. "Once you're under the water, you want to create a small hole, so the water that comes up doesn't make a big splash." [Video: The Physics of Diving]

Action and reaction play a significant role in archery as well. To shoot an arrow straight and true at a target, archers must first impart a forward force on it. To do this, an archer will pull back on the bow string, thus storing potential energy in the string. When the string is released, it imparts this potential energy to the arrow in the form of kinetic energy, propelling the arrow forward.

To keep an arrow on its intended target once it is released, its shaft is tipped at its end with fletching in the form of bird feathers or a plastic substitute — traditionally, three per arrow. Fletching offers aerodynamic stability through air resistance. If some force, such as air turbulence, tries to push the arrow off its straight course, the fletching produces a drag against that change in motion, hindering the movement off course. Sometimes fletching can induce a spin on the arrow, which can further improve its stability and accuracy by equalizing forces from air turbulence.

Badminton is a racquet sport where players pass a projectile called a shuttlecock or birdie back and forth over a net. In contrast to spherical balls, shuttlecocks, which are balls with cones of feathers or nylon protruding from their sides, travel much differently through the air. Their feathers provoke a much larger drag force from air resistance, so they lose speed much more quickly than balls do.

Like fletching on an arrow, the feathers on a badminton shuttlecock improve its aerodynamic stability — so much so that regardless of which direction the feathered cone is facing when the shuttlecock is struck, it will quickly orient itself so that the feathers are pointing backward as it flies through the air. Players must consider the unique aerodynamics of their sport when aiming the shuttlecock, and must exert more force than would be needed on a comparable ball to hit the shuttlecock full across the court, because of its high drag.