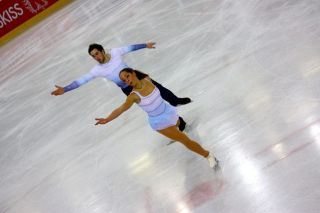 To see physics in action in everyday life, look no further than figure skating.

And as the men hit the ice to show off their spins and combinations Tuesday in the Winter Olympics, here's a perfect chance to watch examples of basic scientific concepts, such as friction, momentum, and the law of equal and opposite reactions.

On one level, the difference between dancing on a floor and skating on ice is the lack of friction. Smooth ice provides very little resistance against objects, like ice skates, being dragged across its surface. Compared to, say, a wooden floor, ice has much less friction.

So what is friction exactly? It's a force that resists when two objects slide against each other, dissipating their energy of motion. Friction arises because the molecules on both surfaces bond with each other, and resist when the surfaces try to move away and break the bonds. The more rough and jagged something is, the more easily more of its molecules will come into contact with molecules on the surface it touches, and thus the greater force of friction they will exert.

The general low level of friction on ice allows a skater to glide along the surface smoothly without friction stopping the motion as soon as it's begun.

At the same time, if there were no friction at all on ice, skating would be impossible, because it is the friction between the skate and the ice when a skater pushes off that starts the motion to begin with. And friction is also what allows a skater to ever come to a stop.

Momentum, which is basically how much force it would take to stop a moving object. Essentially, the heavier something is and the faster it's going, the more momentum it will have, and the harder it will be to slow it down.

Angular momentum applies to a body rotating around a fixed object. The amount of angular momentum, say, a spinning skater has depends on both the speed of rotation, and the weight and distribution of mass around the center. So, for two skaters of the same mass rotating at the same speed, the one with its mass more extended in space will have the greater angular momentum.

A fundamental law of physics holds that momentum is always conserved, meaning that unless some outside force enters a system, its total momentum must stay constant.

This law of physics explains why when a figure skater pulls in her arms when executing a turn, she spins more quickly. With arms outstretched, her mass is distributed over a greater space. When she draws her arms inwards, that distribution is reduced, so her speed must pick up to counteract this difference and keep her total momentum constant.

One of the most well known tenets of physics — for every action, there is an equal and opposite reaction — was first discovered by Isaac Newton.

And it's this idea that allows skaters to move across the ice. When they push off against the ice, or "stroke" with their skates, they are applying a force down and back against the ground. Well, the ground just pushes right back, supplying a force forward and up that propels the skaters into a glide or jump, depending on the particulars of the force they applied.

Since the forward push is resisted only by the slight friction of the ice, the skater can glide easily.