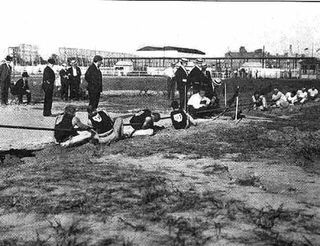 From the long-defunct tug-of-war to the resurrected tennis matches and the tried-and-true gymnastics, the Olympics have evolved dramatically over the years while a few elements remain forever a part of the games.

The inaugural modern games in 1896 offered nine sports, compared to 28 at this year's Olympics in London. In the intervening decades, various events have come and gone, including baseball, golf, water motorsports and demonstration sports such as ballooning and American football.

In all, 33 medal events or demonstration sports have come and gone during the modern Summer Olympics.

The host country used to dominate the decision about which events to offer, allowing for some rather unusual competitions. But the International Olympic Committee (IOC) now oversees this process and offers parameters for determining what a sport is as well as whether or not it should be included.

What makes a sport a sport?

The IOC uses the terms "event," "discipline" and "sport" to organize their athletic competitions. An event is any competition that results in the awarding of medals, such as the women’s 100-meter backstroke. The discipline of swimming, which comprises various events like the backstroke, breaststroke and freestyle, is a branch of the sport aquatics.

A sport is governed by an International Federation (IF) that oversees each individual discipline within the sport.

This can add some confusion. Most people consider swimming, diving, synchronized swimming, and water polo as four separate sports. But in the eyes of the IOC, they are disciplines.

Sport and discipline are synonymous in some cases, as with football and basketball.

How are the sports determined?

For a sport or discipline to be considered for the Summer Olympics, it must demonstrate popularity among both genders in various parts of the world. Men from at least 75 countries and women from at least 50 countries should practice a given sport on four continents.

The decision to add or remove sports from any edition of the Olympic Games must be made before selecting the host city, according to the Olympic Charter. This usually happens at least seven years before an Olympics take place.

But the addition of disciplines or events to the program of any Olympic Games by the IOC Executive Board cannot be made later than three years before the opening of these Olympic Games.

When determining which sports to include in an Olympic program, at least 25 of the sports offered must come from the 28 sports established by the IOC. Up to three additional sports may be added that are not from among this pre-established group.

Though the Games will continue to evolve, the tug-of-war is likely to remain charming Olympic nostalgia.