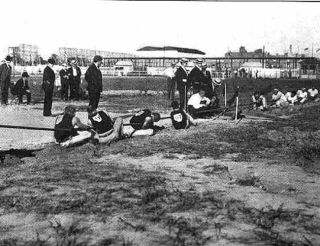 Olympic events have changed dramatically over time [Learn How & Why]. Here's the full history:

Sports at the Games

This summer's Olympics in London showcase 28 officially recognized sports, with their disciplines listed below and the date of their initial appearances in parentheses:

Note that some of these events were not offered during every Summer Olympic Games between their initial appearance and now. For example, tennis was an Olympic sport from 1896 to 1924. It was then removed from Olympic competition due to disputes between the International Tennis Federation and the IOC over allowing amateur players to compete. But tennis has been played again at the Olympic level since 1988. Rugby was re-introduced in 2012 for the first time since 1924.

Sports at the Inaugural modern Olympics

The first Modern Olympics in 1896 consisted of nine sports, all of which are currently included in the Summer Games:

Since the birth of the Modern Olympics, a number of events have come and gone. And most of the discontinued sports, listed below, led short lives prior to 1924. The initial protocol allowed the host country to largely determine the sporting schedule. But in 1924 the IOC assumed this role.

Ultimately, these sports faded due to a lack of international appeal and/or a governing body that would have otherwise boosted their standing in the eyes of the IOC:

These sports were first intended to offer the Olympic host an opportunity to showcase sports unique to this country. So in 1932, the Olympics in Los Angeles included American football. And the Australians added their version of football, which is similar to rugby, to the 1956 Melbourne Games. (This trend is evident in the list of demonstration sports below.)

But because sports for the next summer games are approved or rejected shortly after the completion of its predecessor, demonstration sports transitioned into the role of trial runs for a medal sport in the next Olympics.

Demonstration sports are scattered among various Summer Olympics from 1900 to 1992: