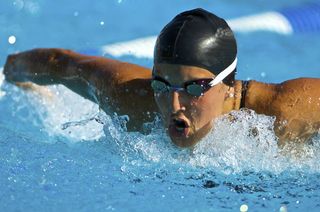 The same secrets Olympic swimmers use to inch ahead of an opponent may also lead to success in everyday life, psychologists say.
(Image: © Schmid Christophe | )

LONDON – All Olympians have outsized athletic talent and event-specific skills. What separates the medalists from the nonmedalists, however, may often come down to psychology, researchers have found.

In fact, some of the personality traits and habits associated with greater success at the Olympic Games may be applicable to nonathletes with more common goals, such as career achievements and health gains, Daniel Gould of Michigan State University told LiveScience. Considered one of the world's most imminent sport psychologists, Gould gave a keynote address at the British PsychologicalSociety's Annual Conference here this April.

Here are seven secrets of success gleaned from Olympic medalists.

1. Knowing how hard to push

Many Olympians, unsurprisingly, come from families that model a strong work ethic. As children, many Olympians were expected to follow through on commitments, and tremendous dedication is considered necessary to win a medal.

But the tendency to turn to hard work, when anxious to achieve, can sometime backfire. The failure of many talented Olympians has been attributed to working too hard, especially right before the competition. Such "overtraining," Gould explained, can lead to injury, poor team coordination or simply a subpar performance.

In general, when striving for any success, rest may need to be prioritized alongside preparation.

Pop psychology loves to champion the benefits of optimism. And it is true that having a more optimistic personality is associated with successboth at the Olympics and in everyday life, Gould said.

But the power of optimism does not lie in seeing the world through rose-colored glasses. In fact, an optimist's initial assessment of a situation tends to be as realistic as a pessimist's, according to research by Michael Scheierand colleagues at Carnegie Mellon in Pittsburgh.

Optimism's value likely lies in the motivation it creates to improve one's life, scientists think. Optimistic people, for example, are more likely to actively search for solutions to problems than pessimistic people, who may think such efforts are futile. [7 Things That Will Make You Happy]

In order for optimism to be truly beneficial — whether for highly competitive sporting events, career ambitions or lifestyle changes — it must be balanced with self-awareness, Gould told LiveScience.

"You need a little self-doubt to keep you honest," he said.

Accurate self-awareness helps people work on faults, know in advance their greatest opportunities for both failure and success, and avoid common pitfalls, such as overtraining, losing concentration or burning out.

It also helps keep the ego in check, with the knowledge that none of us are too big to fail, Gould said.

Psychologists differentiate between sources of motivation that come from within a person — such as a natural interest — and those that come from outside, like praise and monetary rewards. The former, so-called intrinsic motivators, are more strongly correlated with success than external rewards, Gould said.

Researchers have further found that external rewards can actually undermine intrinsic motivation. This is why, when we start getting paid for our hobby, it becomes work and when that book about space travel becomes assigned reading, it no longer follows us to bed.

This can be a particular problem during the Olympic Games where the potential external rewards are very big, and very real, sources of distraction. As one Olympian put it, Gould related, "It's like I put a million dollars on the table and say you can have it, if you don't think about it."

5.  The healthy type of perfectionism

Adaptive perfectionists are conscientious people with high standards for themselves and, often, others as well. But these standards do not preclude them from rolling with life's punches. They also tend to have stellar planning and organization skills — which may help them to cope with the unexpected.

Maladaptive perfectionists, on the other hand, are usually preoccupied with control, haunted by both past and future mistakes and put undue stock in meeting, or surpassing, the expectations of others. In this rather fragile mindset, people can lack the flexibility necessary to deal with life's unpredictability, whether they are trying to manage a large dinner party or win a gold medal. [7 Personality Traits You Should Change]

6. Plans to deal with distractions

From media and agent requests to family pressures and the enormous amount of promotional products they are given, Olympic athletes have a lot thrown at them right when they are supposed to concentrate most.

Deciding, beforehand, on plans to deal with distractions, mishaps and setbacks — and then adhering to those plans — has been correlated with greater success at the games. Similar tactics would likely help anyone trying to meet a significant goal.

Perhaps the most important strategy for success, especially when it comes to achieving a long-term goal, is having a routine, and adhering to that routine even in the face of chaos, Gould said.

A routine can steady an athlete amidst the buzz, distractions and anxieties inherent to the games, and help them perform at their best. In fact, medalists often say they felt as if they were on "automatic" during their victories, while nonmedalists are less likely to report similar experiences, Gould said.

Routines, he pointed out, can vary dramatically between teams and personality types. Some may meditate before competing while others may crack jokes and socialize before turning on their game face. The consistency may be more important than the actual acts, Gould suggested.

Quoting another successful Olympian, Gould said, "More than anything else, athletes need to have already a routine established and they need to stick with that routine and take refuge in that routine because at the games, everything changes."