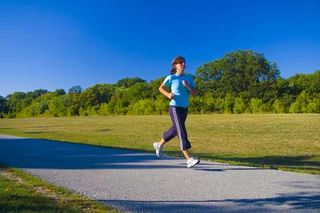 A new study finds each person has an optimal running pace that uses the least amount of oxygen to cover a given distance. Image
(Image: © Dreamstime)

Many of us – especially after washing down the last of the holiday sugar cookies with yet another cup of eggnog – resolve to revamp our exercise routines in the New Year.

Unfortunately, as earnest as the plans may be, the odds of following through are pretty dismal. A yearlong study of 3,000 people with New Year's resolutions found that only 12 percent reached their goals, according to research conducted in 2007 by psychologist Richard Wiseman of the University of Hertfordshire in the United Kingdom. [5 Tips for Keeping Your New Year's Resolutions]

But while many resolutions are about not doing something – avoiding sugar, alcohol and sleeping in – resolutions about exercise are more positive. They add something to your life.

And researchers speculate, any given exercise routine may be easier to stick to if it fits your personality.

While no one is arguing that an individual personality can be completely described by these traits, psychologists consider the Big Five, as they are called, to be the basic dimensions of every personality.

Each trait exists on a continuum, said consultant psychologist Dr. George Sik of eras ltd in Norfolk, United Kingdom. Some people are very extroverted, while others are not at all, and most people are somewhere in the middle.

Individual personalities are composed of various amounts of the Big Five, psychologists say. And a person who is, say, very agreeable can simultaneously be considered neurotic and conscientious, making it possible to relate to several of the below descriptions.

Never miss a deadline? Always on-time? Tend to follow the rules – to the letter? Psychologists would likely describe you as highly conscientious.

"Conscientiousness is strongly related to taking up physical activity in general," said Martin Hagger, a research psychologist at the University of Nottingham in the United Kingdom.

Conscientious people like having a regular exercise routine and, as a result, may prefer solo activities, such as weightlifting or using a treadmill. Such activities do not require coordinating with others, or even the cooperation of the weather, giving conscientious people a sense of control that they enjoy, Hagger told LiveScience.

Conscientious people are most likely to say they exercise for health reasons and are particularly open to exercise advice from doctors, according to a 1998 study in the journal Personality and Individual Differences.

Not a planner? Hate making promises? Short attention span? Less conscientious people and those who are more impulsive need to take extra measures to help them stick to a routine, such as writing down the plan in detail, especially the when and the where, Hagger said.  "At lunch time, I will put on my running shoes…"

Breaking the goal into smaller bits can also help, Wiseman advised. For example, instead of saying "I will be in marathon shape by the end of the year," try "I will increase my running distance by two miles each month."

Impulsive people may also want to focus on physical activities that "give you a buzz or high," Hagger said. Sprinting, bungee jumping and contact sports can all fit the bill.

Love to party, chat with co-workers and plan your BFF's b-day celebration? Feel depleted after spending a day alone?

Exercise alone can increase energy levels but, for some people, the biggest boost comes from interacting with others.

People who score high on personality traits such as extroversion (think, outgoing) and agreeableness (cooperative) are most likely to enjoy group classes and team sports, Hagger told LiveScience. Highly agreeable people, however, may be turned off if the dynamic is too competitive or aggressive.

Other exceptions may be yoga classes and golf teams, both of which can attract more introverted people, Sik said.

Find it hard to relax? Prone to worry or anxiety? Do you shift moods easily? This can be all it takes for a psychologist to label you "neurotic." (It is not as bad as it sounds; just means you're rather sensitive.)

According to research, people who have high levels of this personality trait exercise to reach weight-loss goals and improve their physical appearance. They may also use exercise as a coping mechanism to release anxiety, Sik said.

Exercise has a calming effect, he said, and people who exercise regularly – neurotic or not – tend to have exhibit more emotional stability.

Always open for an adventure? Continually seeking out the next art exhibit, film festival or big new idea? Like finding opportunities to be imaginative?

Psychologists would say you exhibit "openness to experience."

People who score high on this trait in personality tests will likely be happiest exercising outdoors, especially an activity like running, cycling, or walking.

"They can vary the route and explore," Sik said.

Particularly open people are also more likely to exercise for stress relief, something that may be a product of their unconventional lifestyles, researchers suggested in the Personality and Individual Differences study.

A little of this, and that

Of course, most people are combinations of the above, Hagger said. For example, a conscientious man who is also extroverted may want to join a very competitive sports team. An agreeable woman with lots of openness to experience may be overjoyed organizing group walks in the park.

The important thing is making the commitment to exercise. "People will make New Year's resolutions, stick to them for a couple weeks and then they fall by the wayside," Hagger said, because they get busy and other distractions gain priority.

But finding the right exercise routine – something that expresses (or soothes) your personality – can make it easier to stick to.

Still, there's no need to get neurotic about it: "Most people will find their ideal exercise instinctively," Sik said.