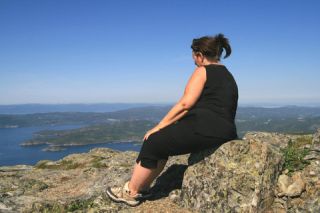 If obesity is a disease, like cancer or heart disease, as researchers stress, it is time to stop blaming lack of willpower for the extra poundage and ask — non-judgmentally — why are we so fat? From better hygiene to foods that mimic drugs, the answers may shake up your diet.

In 1998, 29 million people suddenly became overweight without gaining an ounce. That summer, the U.S. government announced new guidelines lowering the threshold of what classifies a person as overweight. Previously, if your body mass index (BMI) was less than 28 for men, or 27 for women, you were considered "normal." Now only BMIs of 25 or below are considered healthy. (BMI is a ratio of weight to height, and is considered an indicator of how much body fat a person has.)

While our food-stuffed, exercise-starved, modern lifestyles are still the most popular scapegoats, in the future, we might also blame frequent hand-washing and cleaner water.

In experiments done on mice, researchers have found that certain intestinal bacteria can help a body suck more calories out of the same amount of food and even increase a person's appetite. It is possible these bacteria gained prominence as we wiped out competing bacteria with antibiotics and better hygiene practices, said senior researcher Andrew Gewirtz at the Emory University School of Medicine in Georgia.

The finding does not suggest that obesity is an infectious disease — it is nearly impossible to change your intestinal helpers after the first few years, or even days, of life — so don't expect an obesity antibiotic anytime soon.

Not everyone has succumbed to environmental changes: Skinny people do still exist. These people have won "the throw of the genetic dice," said Susan Carnell, an obesity researcher at the Columbia College of Physicians and Surgeons in New York.

Genes likely control how easily one feels satiated, researchers are finding. People who lack the genes for a voracious appetite often don't understand how hard it is for someone who isn't so genetically lucky, Carnell said.

New research has shown that an unborn child may receive "epigenetic" messages in the womb about how to regulate his or her weight. Epigenetics is the idea that even if genes themselves aren't altered, how they function can change.

Researchers at the Arkansas Children’s Nutrition Center in Little Rock transferred the newborns of normal-weight and obese rat mothers, or "dams," to the care of svelte females. Even with nearly identical genes and upbringing, only the babies from the wombs of the rotund became plump themselves.

"This occurred despite the fact that the offspring of overweight dams ate the same amount of high-fat food as the offspring of lean dams," said study researcher Kartik Shankar in a press statement.

People judge their own weight based on that of others and, well, in the land of the obese, the overweight feel superior. Research has shown that if your friends are fat, you are more likely to join the big booty camp yourself — even if your obese pals live far away. An underlying reason might be a resetting of what you consider normal, so a scale reading above a certain point could have sent you into tears one day and barely gotten notice the next. Such findings suggest that obesity has cultural and psychological causes as well as physiological ones.

We don't move our bodies nearly as much as our hunter-gatherer ancestors, a fact that has likely contributed to our collective weight gain. Exercise is great for maintaining weight and regulating appetite, Carnell said.

But if you want to lose a bulge, or ten, and "you are not reducing calories, just exercising, it will take a very long time to lose a single pound," said Caroline Apovian, an obesity researcher at the Boston University School of Medicine.

"If McDonald's didn't exist, we'd all be a lot thinner," Carnell said, referring to fast foods in general.

Highly palatable foods, such as those available from fast food chains, are "layered and loaded with fat, sugar and salt," all of which, instead of satiating us, actually prompt us to continue eating, said Dr. David Kessler, former FDA commissioner and author of "The End of Overeating" (Rodale Books, 2009). Such foods cause particular excitement in areas of the brain associated with emotion and reward — much like alcohol, sex and drugs.

With sugar, salt and fat on every street corner, Kessler said, "we are living in a food carnival." And like an over-stimulated preschooler glazing over with fatigue and irritability, our bodies are responding to the food fun house by developing insulin resistance, diabetes and systemic inflammation, which is a body-wide immune response that has been linked with health issues, including heart disease and cancer.

While genes and environment are responsible for two-thirds of the differences in people's BMIs, the remaining third is psychological. Not only can our jam-packed lifestyles drive us to self-medicate with food, stress and lack of sleep may take an unfriendly toll on metabolism.

The U.S. food culture, or lack thereof, is also to blame, Kessler said. Unlike other developed countries, which have been slow to match our obesity rates, we put limited value on the pleasures and rituals of dining — lunch is eaten at our desks, breakfast on the commute.

Such disrespect for food likely exacerbates weight problems by leaving us perpetually unsatisfied. Tellingly, eating fast has been linked to being overweight while regular family meals are associated with a decreased risk of obesity.