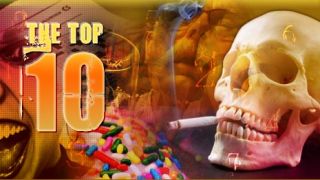 Rocker Tommy Lee once said we're not here for a long time, we're here for a good time. Amen, Tommy. Many of us follow his lead every day by shunning the most basic principle of Darwinian evolution — trying to survive — with food, toxins and reckless lifestyles. If you'd like to get in on the act, we present our easiest catalysts to self-destruction.

Last year, at least 400,000 Americans managed to kill themselves based almost solely on what they ate. Heart disease is the country's number one killer and, while some of that comes from genetics, most of it's due to the fat-laden, sugar-heavy junk we put in our bodies. Looking for the most effective, probably most enjoyable way to do yourself in? Have another doughnut. And make it cream-filled!

They don't call them cancer sticks for nothing: Tobacco-related illnesses are America's number two killer, and the most preventable. But if you're bent on putting the kibosh to healthy living, go ahead and light up; just one cigarette will immediately increase your blood pressure and decrease the circulation to your extremities. Imagine what you could do with a pack.

Not only is television entertaining, it can keep us on the couch for hours at a time several days per week. The average American spends a full 9 years of his life glued to the boob tube, years that could otherwise be spent exercising. Resist the urge! Being an obese, sedentary TV-addicted couch potato makes for speedy self-destruction, though you may be a little smarter (if you watch those nerdy science channels).

Creating more stress in your life is a great way to invite all kinds of diseases to attack the body. When you're chronically stressed, the adrenal glands are forced to work overtime and eventually exhaust themselves, inhibiting the immune system. So go ahead and worry about everything from the color of your socks to whether dinner will be ready on time. Your hormones won't know what hit them.

The occasional drink of alcohol, especially wine, can be beneficial to your health, many studies suggest. But if you're looking to do yourself in, overdo the two-drink-per-day limit and imbibe heartily. Besides alcoholism of course, too much booze causes liver damage, diabetes and is the root cause of nearly 100,000 deaths per year.

If people wanted to increase their chance of surviving 'til a ripe old age, they'd fly everywhere. Driving kills more people aged 1 to 35 than anything else, a statistic that could drop to near zero if everyone just stayed home. But how fun would that be? So hit the road, forget the speed limit, yak on your cell phone?or worse, eat?and don't buckle up if you're anxious to become part of this popular statistic.

Have a Lot of Sex

Most people agree that sex in itself isn't so bad, it's how you do it that could mean life or death. The smart self-destructor doesn't use protection, ignores the partner's sexual history and shuns the annual medical exam. Twelve million Americans contract sexually transmitted diseases every year, many of which can leave the victim infertile. Killing yourself and preventing new births: there?s a two-fer!

Dumb Down Your Brain

Reading, doing crosswords and tackling sudokus are all risky behaviors if you're looking to avoid Alzheimer's. The degenerative brain disease attacks almost everyone who lives long enough, though mind games and puzzles are known to ward off the effects.

Many Americans agree that their health is hardly worth finding thirty minutes among 526,000 for that once-per-year physical exam. It's a good tactic if early disease detection and important medical consultation are going to get in the way of your Tommy Lee lifestyle. If you don't want to hear the doctor tell you our other tips for self-destruction are unhealthy, just don't go.

Inadequate sleep (less than 7 or 8 hours a night) has been tied to many different health problems, including obesity, diabetes and cancer. Mental fatigue is also as big of a risk factor for vehicular accidents as alcohol. And just think of all the time you'd have for destructive behavior if you shunned the zzz's altogether!