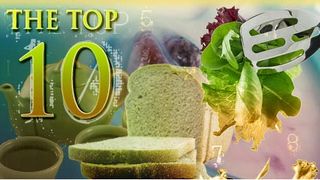 What a pity that most Americans have never eaten pizza and confuse it for the junk food advertised on television. In Italy there are laws defining pizza, which set allowances on the type of flour, tomato, mozzarella, olive oil, basil and oregano. Pizza is inherently nutritious and filling. Street corner pizza shops in Philadelphia, New York and other large cities kept close to the original idea of simple, fresh ingredients. Then came the pizza chains, which put most local shops out of business. Fresh ingredients were replaced with preservative-laden, cheap and fatty ingredients that could be mass-produced, frozen and shipped across the country. Commercial pizza is now a high-calorie, high-fat, high-sodium, low-nutrient food.

It started as a brilliant idea. Dedicated farmers would become stewards of the land, shunning the toxic chemical pesticides and fertilizers that had proliferated after WWII. They would raise food naturally, cultivate diverse crop varieties native to their soils. Animals raised for food would be treated with care and dignity. And for 30-some years, this has been the case. But organic food is so popular that its value system is in jeopardy. Big players such as Wal-Mart and Kraft want part of the profits, and their demand for cheaper production methods undermines what it means to be organic. And so we now have organic milk from caged cows force-fed organic grain. And we have organic junk food with organic ingredients flown in from around the globe, disguised as health food by virtue of the organic label.

True cereals---the likes of wheat, barley, rice and oats, to name a few---are and have always been the most important food of the human race. The combination of protein, healthy fat and vitamins is unbeatable. The word "cereal" has been hijacked, however, by food producers who make tiny, crunchy breakfast cakes out of true cereal with the addition of sugar, corn syrup, salt, food dyes and preservatives. Try oats with raisins, or barley with 100-percent fruit spread. These are far healthier and far cheaper. [Check out this cereal science.]

The most common form of bread in America (the mass-produced white, soft doughy bread in plastic bags with a shelf life of weeks) is likely a major component of obesity and diabetes. True bread is flour and water with a pinch of salt and yeast. Packaged white bread contains flour plus sugar, corn syrup and often a dozen other ingredients. The processing creates a food product that, once eaten, is quickly converted to blood sugar, called glucose. This causes the pancreas to work overtime and ultimately destroys the organ. Even mass-produced whole wheat breads are unhealthy because they are made palatable by some evil means: the unholy trinity of sugar, salt and softening additives.

Popcorn today rarely resembles the healthy treat it used to be. Popcorn is, well, corn. It's high in fiber, low in calories, and contains only nominal traces of sugar, salt and fat. That changes, of course, when you add sugar, salt and fat. Microwave popcorns are the biggest offenders with their long list of ingredients to enhance flavor. Try buying popcorn kernels in bulk for pennies a serving and control the amount of salt and (real) butter. [While you're here: Find out why popcorn pops.]

At the risk of pissing off Idaho, the Russet varieties of potatoes, with their brown skin and white flesh, are only marginally healthy to begin with. Cheap and hardy, yes, with a few nutrients, they serve some purpose as a filler. But their starch is quickly converted by the body into blood sugar, called glucose, and raises the risk of diabetes and obesity. And because they are arguably the least flavorful of the hundreds of potato varieties in the Americas, we have to do things to make them tasty. We boil and mash them and cover them in butter, or we cut them into strips, deep-fry them and cover them with salt.

Green tea is widely consumed throughout Asia and is nothing short of an art form in Japan. The tea contains antioxidants and other healthful components shown in clinical studies to possibly prevent cancer, heart disease, senility and other diseases associated with aging. But most Americans don't like the taste, so what you get here is a green tea drink loaded with sugar and other additives, sold under the disguise of a health drink. Any ingredient after the words "green tea" on the bottle chisels away the health benefits.

Soup is remarkably healthy, inexpensive and easy to make. A lunch of hardy homemade soup and bread, cooked in bulk and frozen in individual containers for the week, will cost less than a dollar a day. Canned soup, on the other hand, is a miserable concoction of salt, fat, artificial additives, preservatives, water and maybe part of a carrot. One serving typically contains 1,000 milligrams of sodium, about half your daily allowance. Save your chicken and beef bones and vegetable tops and make you own broth.

Armenians in my neighborhood when I was growing up used to make their own yogurt, which is essentially milk fermented with certain bacteria. This is high in protein, calcium and vitamins and can be eaten by adults, who generally cannot digest milk well. What is sold in mainstream U.S. supermarkets under the name yogurt is really a dairy dessert loaded with sugar and processed fruit, disguised as a health food. Try plain, fat-free yogurt and add your own fruit.

The fish part is usually pollock, rather healthy. The stick part seems to be the remaining 20 ingredients listed on the box, which aren't so healthy. Doctors have been advising people to eat more fish for years, because they are high in healthy fats and low in unhealthy fats compared to beef and pork. Yet when you buy processed fish products or when you order deep-fried fish from a fast-food joint, the bad starts to outweigh the good.