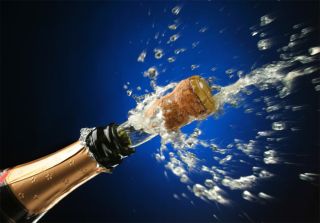 A successful champagne uncorking typically involves a pop and fizz. But according to a vision expert, a proper uncorking could also keep your eyes safe.
(Image: © Stockxpert.)

From quitting smoking to losing weight, lots of people have high hopes as they ring in the New Year. To beat the odds and actually keep those bold resolutions, be ready for some failures and don't give up, one expert says.

"Behavior and habit changes are very difficult for many people. On the other hand success brings a lot of rewards," said G. Alan Marlatt, director of the University of Washington's Addictive Behaviors Research Center.

Marlatt offers some tips for keeping your resolutions.

In Marlatt's research, he has found that people who make more than three resolutions at a time tended to break more of these vows. Even so, he recommends pairing up resolutions that complement each other. For instance, if you decide to stop overeating, also pledge to start exercising. That way, you'll see the rewards and continue both resolutions.

"People either make resolutions to stop doing something, like quit smoking, or to start something new, like exercise," Marlatt told LiveScience. While both types are fine, people tend to fail more often with the "stop" resolutions. That's because if you vow to stop eating sweets and you have just one brownie, you've effectively broken the resolution. The key to getting back on the wagon is your reaction to a slip-up, Marlatt says.

3. Get back on the wagon

People who break a resolution and then blame themselves with, "This proves I have no willpower," are likely to give up. A more productive inner dialogue would say something like, "I had one cigarette but I've got to make sure I tell my friends that I'm quitting so this doesn't happen again," Marlatt said. "Try to be a little bit more accepting of the fact that you may make a mistake."

In fact, within the first year of vowing to abstain from cigarettes or drugs or alcohol, about 85 percent of these people will have at least one lapse. "The good news is if people keep trying, eventually they are more likely to be successful," Marlatt said.

4. Come up with a strategy

In addition to your initial motivation, it's good to have a path sketched out, Marlatt said. If you decide to start eating healthier foods and less junk, figure out a plan for how to tackle your food habits. For instance, you could find a support system of friends or an established group of like-minded individuals; or you might make sure to stock your fridge with only these good foods.

"The more you can do to figure out how you can do it the better," Marlatt said. "Where there's a will there's a way. You need to focus on the way through."

Research has shown that people who keep track of their resolution changes do better at sticking to their pledges than others. The diary might include situations in which you found it difficult to get to the gym or avoid a cigarette, along with ways you could handle the situation in the future, Marlatt said.