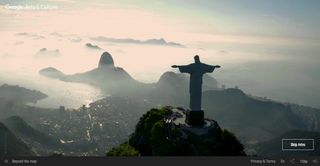 Rio: Beyond the Map is an interactive video experience
(Image: © Google/Screengrab)

If you're not traveling to Brazil for the Summer Olympics, you can still explore the geography and culture of Rio de Janeiro, courtesy of Google.

Rio: Beyond the Map, released to the public July 29, deftly blends archival materials with stunning video, interactive media and profiles of artistic Cariocas, as natives of Rio de Janeiro are called.

The project's title alludes to Rio's favelas, the poorly mapped neighborhoods where 1.4 million people, or 20 percent of the city's population, live without addresses, according to Google's blog post about the project. Mapping these regions is part of another Google initiative, the "On the Map" project. [14 Strangest Sights on Google Earth]

The experience begins with a 360-degree video of a motorcycle taxi ride up a hillside through the narrow, twisting streets of the São Carlos favela. The interactive landscape then allows users to learn more about landmarks, or watch short segments about artists from the favelas.

Beyond the Map is presented by Google Arts and Culture alongside thousands of images and video curated in partnership with local institutions. Each online exhibits focuses on different art forms and areas of the city, with interactive slideshows that showcase artwork and photography from Rio's rich past and present.

Google has also combined their familiar Street View technology with narration in virtual tours of more than 20 famous locations in Rio, such as the statue of Christ the Redeemer, with its panoramic views, or the white sand beach at Ipanema. The tours are also viewable as virtual reality experiences with a VR headset, such as Google Cardboard, and the Google Arts and Culture app on iOS or Android.