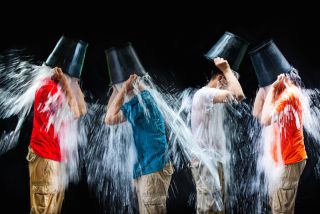 New clues about the genetics involved in Lou Gehrig's disease are revealed today in two new studies, thanks in large part to donations from the wildly popular Ice Bucket Challenge of 2014.

The findings could one day lead to gene therapy treatments, in which researchers would replace faulty genes in people with the disease, or add new ones to fight the condition, also known as amyotrophic lateral sclerosis (ALS), the researchers said.

In one study, the researchers looked at the genes of more than 1,000 people who had ALS (and also had the condition in their family), and compared the results to the genes of about 7,300 people without the disorder. [Top 10 Mysterious Diseases]

The results showed about 3 percent of the people with ALS carried a faulty version of a gene called NEK1, making this gene one of the most common genes implicated in contributing to the disease that has been found to date among people with the condition, the researchers said.

"The discovery of NEK1 highlights the value of 'big data' in ALS research," Lucie Bruijn, chief scientist of the ALS Association, who was not involved in the study, said in a statement. "The ALS Ice Bucket Challenge enabled The ALS Association to invest" in maintaining large repositories of samples from people with ALS, to allow research projects that find exactly these types of results, she said.

About 1 in 400 people will be diagnosed with ALS during their lifetime, the researchers said. The degenerative condition affects nerve cells in the brain and spinal cord, often leading to paralysis and deathwithin 2 to 5 years of diagnosis. There is no cure, and few effective treatments, they said.

About 10 percent of ALS cases are genetic, whereas the other 90 percent are sporadic, meaning they occur in people with no family history of the condition.

The researchers also found instances of the faulty NEK1 gene in another group, in the Netherlands. That group of about 13,000 people were diagnosed with the sporadic form of ALS.

It's likely that the NEK1 variations — in people with both the familial and the sporadic forms of the disease — disable the gene, which has many important roles, the researchers said.

For instance, NEK1 helps nerve cells function, and maintains the cytoskeleton that gives nerve cells their shape. The gene also regulates the membranes of mitochondria, the powerhouse of the cells, which provides energy for neurons' activities, including DNA repair.

In the other study, another ALS research team discovered three different gene variants that are linked to ALS risk. One of the genes, called C21orf2, is associated with a 65 percent increased risk of the disease, the researchers said.

However, it's unclear what C21orf2 does, though it may be related to the internal skeleton and movement of cells, the researchers said. The gene is located on chromosome 21.

During their investigation, the researchers also looked at genetic data from a database called Project MinE, which includes the whole genomes (that is, all of the DNA "letters") of 1,861 people with and without ALS. They replicated their results in two other groups, for a total of more than 41,000 people.

This research identified two genes, called SCFD1 and MOBP, that are associated with increased ASL risk. The MOBP gene codes for proteins found in myelin, a sheath that covers nerves in the central nervous system, according to a 2006 study in the journal Developmental Neuroscience.

Overall, they found that one or two faulty genes could have an enormous impact on a person's risk of developing ALS, which is different from other conditions in which many genes may contribute to a smaller increased risk of a specific disorder.

"Any one of many rare gene variations contributes a large risk for ALS development," study co-author Ammar Al-Chalabi, a professor at the Institute of Psychiatry, Psychology & Neuroscience at King's College London, said in a statement.  "This insight is crucial as it affects the types of treatment strategies that might be effective."

Both studies were published online Monday (July 25) in the journal Nature Genetics.