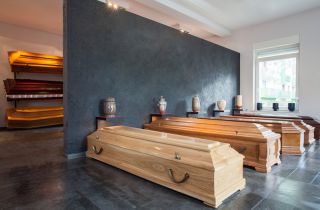 People who work as funeral directors may be at a higher risk of developing amyotrophic lateral sclerosis, better known as ALS or Lou Gehrig's disease, new research finds.

ALS is a progressive disorder of the nervous system that kills the nerve cells that control voluntary movements. Patients experience muscle weakness and increasing levels of paralysis. Typically, the diagnosis is followed by death within three to five years, according to the ALS Association. The cause of the disease is still poorly understood.

The new study suggests that formaldehyde exposure may play a role, particularly for funeral directors, who tend to be exposed to the highest levels of the chemical of any U.S. workers.

"These are people who are involved in embalming," said study researcher Andrea Roberts, a research associate at the Harvard T.H. Chan School of Public Health. [Top 10 Weird Ways We Deal with the Dead]

Animal studies have suggested that exposure to the preservative formaldehyde might increase the risk of ALS by causing proteins in nerve cells to fold incorrectly, as well as otherwise damaging the cells. But studies on humans had returned mixed results on whether formaldehyde exposure is linked to ALS.

For the new study, Roberts and her colleagues turned to the National Longitudinal Mortality Study, a federal database that includes employment information on more than 1 million U.S. adults. The researchers compared the employment information from nearly 800,000 men and 675,000 women in the database with death certificates from the National Death Index. Because ALS is quickly lethal, death certificates are a good way to measure the number of people who have the disease, Roberts told Live Science.

The results revealed that in general, U.S. workers with the highest levels of formaldehyde exposure were three times more likely to die of ALS than those with no exposure at all.

Surprisingly, almost everyone in this highest-exposure group worked in one field: The researchers found that of the 591 people in the study who worked in jobs that the researchers considered as having a high probability for high-intensity exposure to formaldehyde, all but one person worked as funeral directors, Roberts and her colleagues wrote in their article published today (July 13) in the Journal of Neurology Neurosurgery & Psychiatry.

Roberts cautioned, however, that the finding of increased risk of ALS among funeral directors is preliminary. Only two of the 493 male funeral directors in the study died of ALS, which is more than expected by chance, but still a small number, Roberts said. (On average, there are two new ALS cases each year per 100,000 people in the United States, according to the ALS Association.)

More work is also needed to find out if it is indeed the formaldehyde in embalming fluid that might cause the increased risk, Roberts said. Embalming fluid contains a number of other chemicals, and funeral directors are also exposed to dead bodies that potentially carry pathogens. The findings merit a closer look at the profession, Roberts said.

"Our understanding of the causes of ALS is so primitive right now, so any clue is helpful," she said.