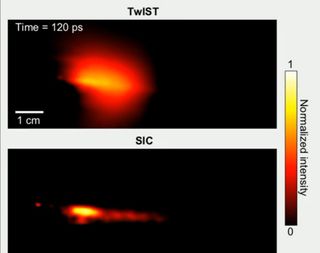 One of the fastest cameras in the world can now take better pictures than ever, even capturing neurons as they fire, according to a new study.

This upgrade could help researchers learn more about how the brain works and how to improve combustion-engine fuel efficiency, the scientists said.

The researchers previously developed a "streak camera" that could image at speeds of 100 billion frames per second in a single exposure — quick enough to capture pulses of light zipping through space. This device was the fastest receive-only camera in the world, meaning it needed only available light for imaging, as opposed to additional illumination from a  source such as a laser. [Photo Future: 7 High-Tech Ways to Share Images]

The scientists have now improved on this technique, called compressed ultrafast photography, boosting its resolution "by about 2.4 times," said study senior author Lihong Wang, an applied physicist at Washington University in St. Louis. "This is a step above something that was already exciting."

In their latest work, the researchers started with a streak camera — an extremely fast type of camera that measures how the intensity of a pulse of light varies over time. They next added a standard digital camera to their streak camera. Merging the data from the digital camera and the streak camera helped enhance image reconstruction, producing images with higher resolution, improved contrast and cleaner backgrounds, Wang said.

With the upgraded system, the scientists captured images of laser pulses each just picoseconds or trillionths of a second long as they traveled through the air. They also imaged the laser pulses as they swept across a printout of a toy car.

This camera technology could be coupled with microscopes or telescopes, Wang said. He and his colleagues are especially interested in using it to watch neurons fire.

"Neural signals can propagate along nerves at speeds of over 100 meters per second (223 mph)," Wang told Live Science. "That kind of speed is too high for any current cameras to capture. We hope we can use our system to study neural networks to understand how the brain works."

The researchers also hope to use their upgrade to analyze ultrafast biochemical reactions that occur within cells, and to study combustion "in order to optimize fuel efficiency," Wang said. Washington University has applied for a patent for the technology and is looking for companies to commercialize it, he added.

The scientists detailed their findings online June 30 in the journal Optica.