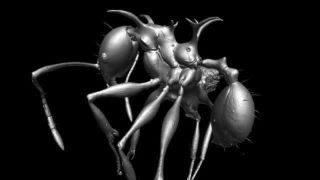 Although they lack fire-breathing capabilities, the unique, spiny characteristics of the new ant species reminded researchers of the dragons from "Game of Thrones."
(Image: © OIST)

A dragon from "Game of Thrones" has come to life — sort of.

A new ant species' dragon-like appearance inspired scientists to name it for the fire-breathing star of the popular fantasy series. The Pheidole drogon's large and distinctive spine reminded researchers of Drogon, one of the dragons on the "Game of Thrones" TV show, adapted from the novels written by George R. R. Martin.

The ant's spiny characteristics were captured in detail using 3D-imaging technology, which the researchers employed to help identify and document several new ant species. Their findings were published in two different papers published online today (July 27) in the journal PLOS ONE. [StarStruck: Species Named After Celebrities]

"This is one of the first studies in ant taxonomy to use micro-CT," study co-author Evan Economo, head of the Biodiversity and Biocomplexity Unit at the Okinawa Institute of Science and Technology Graduate University (OIST), said in a statement. "While this method is gaining popularity in different scientific fields, it is rare to use it in this way."

Taxonomy — the process of identifying, documenting and naming new species — traditionally involves photographs, drawings and verbal descriptions of the species. By using X-ray microtomography, a 3D-imaging technology similar to CT scans used in hospitals, scientists can create virtual representations of specimens. These digital copies can then be dissected, archived and shared.

Now, scientists around the world can study Pheidole drogon without traveling to the tropical rainforests of Papua New Guinea, where it was found, or a museum to see it in a collection.

It's almost the same, if not "better than the real thing," Economo said. "Because you can virtually dissect the specimen and examine [the] internal structure on your computer."

Virtual specimens were also used by the researchers to study the ant's dragon-like spine. They discovered that along with the obvious defense function, the spines were filled with muscle, which makes the ants stronger than their nonspiny counterparts.