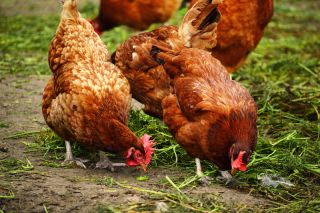 In a perhaps unexpected finding, the smell of live chickens could help in the fight against malaria, new research shows.

Researchers looked at the behavior of the malaria-carrying mosquito Anopheles arabiensis in three villages in western Ethiopia, where people commonly share their living quarters with their livestock. They found that the mosquitoes strongly preferred human over animal blood, and when outdoors, they randomly fed on cattle, sheep and goats.

However, An. arabiensis avoided chickens both indoors and outdoors, even when there were many chickens around, the study showed. Previous research has suggested that this species of mosquito avoids birds.

BecauseAnopheles mosquitoes primarily use their sense of smell to find hosts, the scientists collected hair, wool and feathers from the cattle, sheep, goats and chickens in the villages, identified scent compounds known as odorants that were unique to each and then investigated how well these odorants repelled the mosquitoes.

To further test the mosquito-repelling power of these odorants, the researchers had volunteers sleep under untreated bed nets in a village's thatched houses, then set mosquito traps, which sucked up any mosquitoes that got close to the sleepers. In 11 huts, the researchers baited these traps with a variety of scents, and then collected mosquitoes overnight.

The scientists found that significantly fewer mosquitoes were caught in traps baited with chicken odors than with other scents. Suspending a live chicken in a cage next to a trap had a similar repellent effect.

These findings could lead to new, all-natural mosquito repellents that can, in combination with such tools as bed nets, help protect people from malaria.

Globally, there were 214 million cases of malaria in 2015 and 438,000 deaths because of it, according to the World Health Organization. The area hit hardest by malaria is sub-Saharan Africa — in 2015, the region was home to 88 percent of malaria cases and 90 percent of malaria deaths.

Malaria is spread by several species of mosquitoes with the genus Anopheles. The widespread use of indoor insecticide spraying and insecticide-treated bed nets has significantly quelled the main malaria-carrying mosquito, Anopheles gambiae, throughout much of sub-Saharan Africa. However, its cousin, Anopheles arabiensis, has emerged as a new threat that cannot be subdued in the same manner.

Unlike An. gambiae, An. arabiensis not only attacks indoors, but also outdoors.

"There is a dire need to identify novel mosquito repellents that the insects are less likely to develop resistance against," Ignell told Live Science. "Using natural, ecologically relevant repellents is probably a better option than developing new synthetic repellents, where we often do not know how they function."

The scientists detailed their findings online July 20 in the Malaria Journal.