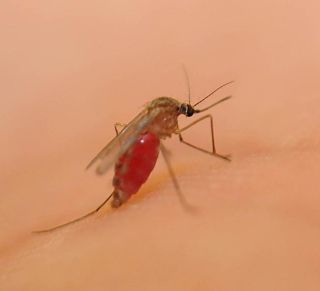 Image of the Culex quinquefasciatus mosquito, an insect that is attracted to the scent of human blood.
(Image: © Kathy Keatley Garvey, UC Davis Department of Entomology )

When the time came for chemical ecologist Walter Leal to test whether humans make a natural odor that attracts mosquitoes, Leal himself was the first to volunteer.

"I measured my own levels," Leal said.  "I thought I would set a good example. If you do it first, then others won't be scared."

In truth, there was little if any reason to be frightened. The scientists were looking only for the substance itself, not trying to find out whether the compound would lure the insects into a blood meal. And they found it — nonanal, a substance made by humans and birds that creates a powerful scent that Culex mosquitoes find irresistible.

Leal only had to roll up his sleeve. His colleagues laid a syringe-like instrument next to his skin, and then wrapped his arm in aluminum foil to keep the environment confined. After an hour, the tip of the syringe was injected into a special machine to see if it contained nonanal and, if so, how much his body had produced.

Those results may well explain what happened to him two years ago in Mexico during a beetle hunting field trip when — despite extensive precautions — mosquitoes went after him with a vengeance.

"There were so many mosquitoes, I could not believe it," Leal recalled. "I sprayed Deet everywhere, including in my hair. The next morning I realized they'd gone through my socks, and bitten me like crazy — and I had on thick socks. If you forget about one particular spot, the mosquitoes will find it — and go in. They'll go through anything, even jeans, as long as they know there is a blood vessel on the other side. They can sense the heat."

Nevertheless, while most people avoid insects, especially biting ones, Leal, 55, and a professor of entomology at the University of California at Davis, searches for them with enthusiasm.

"The diversity and physiology of insects is so remarkable," he said. "One insect is so different from another — that's what makes them so interesting."

In his research, Leal is best known for his work on insect sex pheromones (chemical messengers) and the chemical ecology and communication of insects, all with potential applications for pest control. He figured out why mosquitoes are repelled by Deet — they really hate its smell — and he has identified and synthesized complex pheromones from such insects as scarab beetles, true bugs, longhorn beetles, moths, the naval orangeworm, and even cockroaches.

"I can work with any insects, including the cockroach," he said. "They are not so nice. They eat almost everything, so it is impossible to make an environment not accessible to them. And it's hard to kill them — they have sensors for air, so when you try to hit them, they detect the movement and get away.  I have heard people say that they eat cockroaches, just to show they're not so bad. I'm not one of them."

His personal favorite? Scarab beetles. "They are so beautiful and elegant," he said. "But it's very difficult to work with them here in California because many of the species are invasive. So we can't have them in California."

Leal grew up in Recife, Brazil, where his sister and three brothers still live. "I am the only one who left,'' he said. He made his first trip to America in 1976 as a student to help broadcast news stories about the Brazilian soccer team during the Bicentennial World Cup.  "I still have that passport," he said.

He became interested in environmental issues in college, and received his bachelor's degree in chemical engineering from the Federal University of Pernambuco in Recife. He earned his two advanced degrees from universities in Japan, where he spent 16 years, most of them working for the Japanese government. He earned a master's degree in agricultural chemistry from Mie University in Tsu-Mei, and a doctorate in applied biochemistry from Tsukuba University in Tsukuba, near Tokyo. He moved to the United States in 2000 when he joined the UC Davis faculty.

Recently, he was selected as a Fellow of the Entomological Society of America, a prestigious honor that recognizes up to ten members each year for their research and teaching contributions.

Leal's wife is an elementary school teacher, and they have three children. One is in college, the other two are 12 and 9. He claims to have no hobbies. "I work so hard, I have no time left," he said. "Actually, I have hobbies, but don't have time to do them."

Cycling is one of them, so he commutes by bicycle almost every day. It takes him about ten minutes. "Davis is a small, bike-friendly town, with lots of short cuts," he said.

Much as he loves bugs, Leal says he doesn't prefer them to people. Quite the opposite, in fact. "I like people more, which is why I work with mosquitoes — to protect people," he said.

Editor's Note: This research was supported by the National Science Foundation (NSF), the federal agency charged with funding basic research and education across all fields of science and engineering.  Any opinions, findings, and conclusions or recommendations expressed in this material are those of the author and do not necessarily reflect the views of the National Science Foundation.  See the Behind the Scenes Archive.