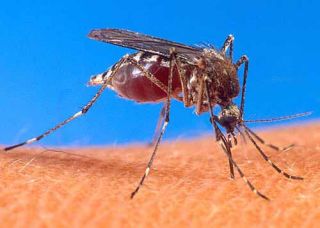 WASHINGTON (ISNS) -- Spring this year was unusually wet in the eastern half of the United States, with heavy rains falling from everywhere from Kansas and Missouri to New York City and Washington, D.C., the National Weather Service reported -- and with those rains has come a bumper crop of mosquitoes.

According to Jeannine Dorothy, a Maryland state entomologist, the wetter than usual spring means more mosquito eggs -- and more of the adult critters to swat.

"Our traps have probably been ten times above normal," Dorothy said. Where overnight traps might normally catch 80 or so mosquitoes, Dorothy said, she and her colleagues were seeing 1,000 or more bugs in their traps in July. Their observations predict an itchy end to summer.

What's the best way to swat those pesky skeeters?

According to Jim Brasseur, a fluid dynamics professor at Penn State University, the best approach is to clap or slap from both sides — rather than a swat from one side only.

Just as a hand passed quickly through a tank of water will force the water to move around it, a hand swept through the air towards a mosquito will push a column of air at the insect, forcing it around the hand. Because mosquitoes are small and light, they can ride the flowing air right over a swatting hand. Unless the aim is perfect and the mosquito is riding the air right into the center of the hand, a swat will fail to make contact and the mosquito will live on.

A better strategy, said Brasseur, is to slap your hands together with the mosquito in between. The two clapping hands will force dual columns of air together and create a larger "dead water" region to trap the mosquito as the hands meet. With a clap, your timing and aim don't have to be quite as good as with a swat, so it is relatively easy to clap the critters between your palms.

Another strategy is to swat the bug against a surface. A flat surface will block the wind flow and also create a dead water region to trap the bug before it is squashed.

One of the best surfaces, advised Dorothy, is the arm or neck. Wait until they land and start biting and then swat them, she said. "Then they are less likely to fly away."

Such skills will be necessary next year as well, she added. The high number of mosquitoes this year means a likely bumper crop of the critters again next year because the females have likely been laying an expanded number of eggs on dry ground, where they will remain until the heavy rains of 2010.