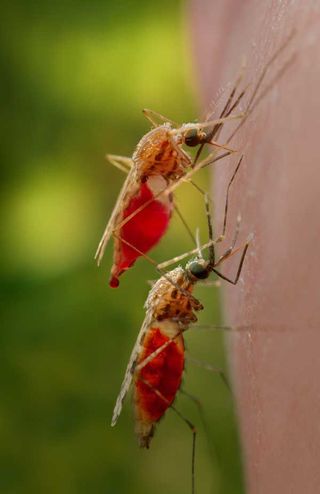 Here, the M and S forms of the mosquito, Anopheles gambiae, one of the top carriers of malaria, jointly obtain a meal. (M, top; S, bottom)
(Image: © Jim Gathany, CDC.)

A strain of African mosquito that carries the deadly malaria parasite is splitting into two species faster than expected, according to a new study. The finding helps explain why the insect can survive in environments spanning from humid rainforests to arid savannas.

The mosquito, Anopheles gambiae, is one of the top carriers of malaria parasites, which infect 250 million people a year, according to the World Health Organization. In recent years, researchers observed that A. gambiae seemed to be differentiating into two species. The two lineages, known as M and S, aren't fully separate — they can still breed together and produce viable, fertile offspring — but the study found successful interbreeding in the wild to be rare.

"These two emerging species are more isolated genetically than we've previously believed," researcher Nora Besansky, a biologist at the University of Notre Dame, told LiveScience. Besansky and her colleagues will report their work in the Oct. 22 issue of the journal Science.

Physically, M and S are indistinguishable, and their divergence may be a result of the insects carving out different ecological niches. S seems to prefer breeding in temporary pools and puddles, Besansky said, while M is more adapted to irrigated habitats like rice fields.

The difference in environments represents  a trade-off. Puddles are light on predators, so S mosquito larvae can expend energy on quick growth without great risk of getting eaten. Exploiting human irrigation, M mosquitoes can grow and breed even in dry areas, but they may have to adapt to avoid predators in these more-permanent environments. For humans, this ecological efficiency is bad news, Besanksy said.

"Because M is able to exploit areas that tend to be drier and seasons that are drier, this has resulted in malaria spreading in both space and time," she said.

Because the two lineages are still so similar, little has been known about their differing physiology and biology. Besansky and her colleagues collected mosquito samples from the West African county of Mali and sequenced the M and S genomes. Instead of looking for differences in the mosquitoes' bodies or behaviors, the researchers were seeking out differences in DNA.

Sifting through the sequences, the researchers found more differences than they expected. That suggested the two lineages aren't swapping genes much in the wild, even though unions between M and S mosquitoes make up about 1 percent of their matings in the wild.

"What is actually going to happen to those hybrids in nature? In the laboratory, they're viable, they're fertile, great," Besansky said. "Presumably what's happening is, in nature that's not the case."

Most likely, she said, M-S hybrids aren't well-adapted to either ephemeral puddles or more-permanent irrigated fields, and don't survive to pass on their genes.

The next challenge is to expand the genome analysis to other populations of malaria-carrying mosquitoes in Africa and elsewhere, Besansky said.

Another study appearing in the same issue of Science maps genomic differences in A. gambiae and another mosquito species, A. arabiensis, from Mali and Cameroon in Central Africa. The research was a first step in expanding the findings, Besansky said.

By better understanding the ecology of the mosquitoes, researchers hope to develop more effective malaria control and prevention, she said.