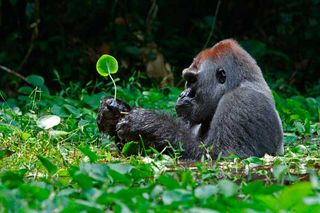 Silverback gorilla (Gorilla gorilla) foraging on herbs in a swampy clearing in northern Republic of Congo. Non-invasive studies of these elusive apes identified three new gorilla-specific Plasmodium species, one of which is nearly identical to human P. falciparum.
(Image: © Ian Nichols and the National Geographic Society.)

An estimated 250 million people become infected with malaria each year and nearly a million die from it, according to the World Health Organization. Now, a new study finds that most of these human infections might trace back to one infected gorilla.

The study, published in the Sept. 23 issue of the journal Nature, used a genetic analysis of the parasites that cause malaria found in primate feces to create an evolutionary family tree for the disease. The parasite most closely related to human malaria came from gorillas, the researchers found, and may have made the leap from animal to human host in a single mosquito bite.

Five types of malaria parasites infect humans, but the most common (and most deadly worldwide) is Plasmodium falciparum. Like all Plasmodium parasites, P. falciparum, as it is called, is carried from host to host by mosquitoes. When the mosquito bites someone, the parasite infects the person's red blood cells, causing fatigue, fever and vomiting. Untreated, the infection is fatal.

For many years, researchers thought the closest relative of P. falciparum was a similar Plasmodium infection found in chimpanzees. This led to the theory that the malaria parasite originated in the common ancestor of chimpanzees and humans and evolved into two species at the same time as chimps and humans did, about 5 million to 7 million years ago.

But this theory became controversial after more strains of Plasmodium were found in gorillas, chimps and bonobos (part of the same genus as chimpanzees), creating confusion over the parasite's evolutionary history.

To investigate the connections between parasite species, Beatrice Hahn of the University of Alabama, Birmingham and colleagues isolated malaria parasites from primate feces specimens the researchers had collected for their work on the origins of HIV. More than 1,000 chimpanzee samples, 805 gorilla samples and 107 bonobo samples were tested, making this the largest study of its kind.

Based on the testing, the researchers estimate that between 32 percent and 48 percent of wild chimpanzees and western gorillas are infected with malaria parasites. Samples from eastern gorillas and bonobos did not show any infection.

A genetic analysis showed that none of the chimpanzee malaria parasites were closely related to human P. falciparum. However, one subtype of gorilla parasite was nearly identical to the human strain. The genetic lineage of the parasite suggests that it evolved after making a single jump from gorilla to human.

"When you take all the sequences that have been published for all human Plasmodium falciparum worldwide, and when you put it in this family tree analysis, you see that they all have one single common ancestor," Hahn told LiveScience. "That tells you that this was the result of a single cross-species transmission event."

Researchers can't say exactly when the parasite first infected humans, because little is known about the rate of evolution for P. falciparum. However, the leap probably occurred between 5,000 and 300,000 years ago, Hahn said.

There is a possibility that another cross-species leap could occur, Hahn said, but "there is a pretty high bar." The genetic analysis showed no evidence of frequent cross-species infections, she said.

The results were "striking," Edward Holmes, an evolutionary biologist at The Pennsylvania State University, wrote in an editorial accompanying the piece in Nature. Holmes, who was not involved in the study, wrote that more research is needed to understand the genetic diversity of malaria parasites.

The goal, Hahn said, is to understand what makes the parasite deadly. HIV, for example, is fatal in humans, but some primate species carry the infection without symptoms, giving researchers an opportunity to understand how the disease and the host interact. Similar gains could be made with malaria, she said.

"Just the comparing and contrasting of basically the same parasite in two species will give you information, which will be invaluable in understanding the pathogenesis of the human disease," Hahn said, "and ultimately, in trying to help treat and prevent it."