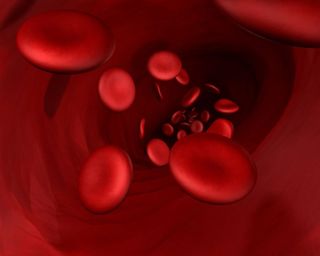 Why Do Blood Types Differ?

Sickle cell disease gets its name from the distorted shape of a patient's red blood cells, which are sometimes C-shaped rather than the normal doughnut shape. The cells' disfigurement comes from the presence of abnormal hemoglobin — a protein in red blood cells that carries oxygen throughout the body. Not all red blood cells are sickle shaped all the time — they take on the shape in response to a stressor, such as lack of oxygen, dehydration or infection.

Having just one copy of the gene confers protection against malaria. This protection is thought to be why the genetic mutation has stuck around over the course of evolution.

It may also explain why the disease primarily affects those who descend from tropical or subtropical countries (where malaria is prevalent), including Africa, South America, Central America and India. In the United States, 70,000 to 100,000 African Americans are estimated to have sickle cell anemia, or 1 out of every 500 births in this population, according to the Centers for Disease Control and Prevention (CDC). About 1 in 12 African Americans has sickle cell trait. The condition occurs in 1 out of every 36,000 Hispanic American births. And around the world, the disease affects millions of individuals.

The abnormal sickle cells are less flexible than normal red blood cells and can also stick together and form clumps, which can cause a number of problems. The cells can block blood vessels and restrict blood flow, which can lead to pain, organ and nerve damage, and stroke.

"People can have problems in any part of their body," said Marsha Treadwell, a sickle cell disease researcher at Children's Hospital Oakland Research Institute (CHORI) in California. "Blood flows everywhere."

The sickle cells also don't live as long as normal red blood cells, lasting around 20 days instead of the usual three months. As a result, patients experience anemia.

Recent advances in pediatric care have led to a decrease in the mortality rate for the disease in children. From 1999 to 2002, sickle cell-related death among African-American children less than 4 years of age fell by 42 percent, according to the CDC. However, the average life expectancy for those with sickle cell disease in the United States is still 30 years shorter than the average lifespan of healthy adults.

By age 45, 24 percent of sickle cell patients have had a stroke, said Elliott Vichinsky, a hematologist at CHORI. But even without having a stroke, the condition may lead to cognitive problems.

In a recent study, Vichinsky found adult sickle cell patients with no history of brain problems performed worse on cognitive tests than controls matched from the community after adjusting for age, gender and education. The result suggests sickle cell patients may have problems with everyday tasks such as multitasking, remembering appointments and carrying out their jobs. The researchers suspect the cognitive problems might be due to a lack of oxygen being delivered to the brain, and so, in many cases, the problems could be reversible. The study was published May 12 in the Journal of the American Medical Association.

Current treatments involve blood transfusions to treat anemia and help prevent stroke, and pain medication for pain episodes. The only sickle cell-specific drug available, known as hydroxyurea, helps alleviate pain and can reduce the rate of mortality in patients.

A bone marrow transplant can cure the disease, but this option is not available for many people because the transplant needs to be matched exactly.