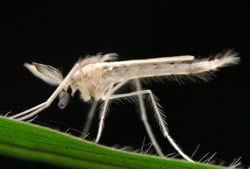 The old adage that you catch more flies with honey may be true, but researchers are betting that the scent of smelly feet will be the best lure to catch disease-spreading mosquitoes.

The researchers, led by Fredros Okumu at the Ifakara Health Institute in Tanzania, are developing traps using natural and artificial foot odors to lure mosquitoes and prevent them from spreading diseases like malaria. Their project was just awarded a grant from Grand Challenges Canada and the Bill & Melinda Gates Foundation.

A whiff of the trap odor may send humans in the other direction, but the scent is a pleasant one to mosquitoes, luring them into traps and keeping the pesky insects out of open-air houses. The researchers also found the trap could be used as a complement to bed nets and bug sprays to protect people from  mosquito-borne diseases, which are prevalent in many of the poorer areas of the world and cause millions of deaths a year. [10 Deadly Diseases That Hopped Across Species]

Nearly 250 million new cases of malaria, which is transmitted by Anopheles gambiae mosquitoes, are reported each year, with almost 800,000 individuals dying each year from the disease, according to the researchers.

"Despite global progress in the fight against malaria, there is still work to be done," Okumu said in a statement. "Malaria has claimed so many lives, including those of people close to me, and my hope is that this innovative device will be part of the solution."

The stinky foot smell (either from smelly socks or similar smelling synthetic bait) is so attractive to mosquitoes that researchers found it draws about four times more of the insects than the smell of a human does. Once the mosquitoes are lured away from their human meal into the trap, they are poisoned or imprisoned there until they die.

The grant will fund Okumu's team in further development and perfection of the device and test its cost-effectiveness and reliability. The team expects the optimized trap to be in communities in two years.