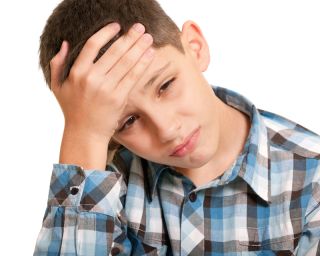 Kids who frequently get migraines may have lower levels of certain vitamins and antioxidants in their blood, a new study suggests.

Researchers found that, of the children and teens in the study who visited a headache clinic for migraine pain, relatively high percentages had mild deficiencies of vitamin D, riboflavin (a B vitamin) and coenzyme Q10 (CoQ10) — a vitamin-like substance that is made in the body and is used to produce energy within cells — compared with kids in the general population.

The findings were presented on June 10 at the annual scientific meeting of the American Headache Society in San Diego, and they have not yet been published in a peer-reviewed scientific journal.

This study showed that vitamin deficiencies are common among children and teens with frequent migraines, and suggests that vitamin deficiencies may contribute to the development ofthese headaches, said Dr. Andrew Hershey, a pediatric neurologist and director of the headache center at Cincinnati Children's Hospital Medical Center. Hershey co-authored the study along with Dr. Suzanne Hagler, also of Cincinnati Children's.

Kids with migraines who were found to have deficient vitamin levels may benefit from eating healthy foods and taking vitamin supplements, he said. [Ouch: 10 Odd Causes of Headaches]

In this study, the researchers scanned a patient database of about 7,800 children, teens and young adults who had been seen at the researchers' headache center over an 18-year period. Before kids were prescribed any medication or supplements for their headaches, they underwent a blood test to check their levels of vitamin D, riboflavin (vitamin B2), folate and coenzyme Q10.

The kids in the database were also asked about their dietary habits and whether they took vitamins, but this data was not part of this study, Hershey said.

Previous studies of the effectiveness of taking these four nutrients to prevent or treat migraines have shown mixed results. There is some evidence that taking riboflavin and CoQ10 may help to prevent migraines, and early studies have suggested that folate may benefit people who have migraines with aura — sensations such as blurred vision and seeing spots that may precede the onset of headaches — the researchers suggest. But not all studies have found an effect, the researchers said.

Deficiencies of vitamin D have been linked with chronic pain conditions in general, but there have been conflicting results regarding its effectiveness for migraines, the study said. [5 Surprising Facts About Pain]

Girls with migraines were also more likely than boys with these headaches to be deficient in these two nutrients, the researchers found.

Although the exact role that vitamin deficiencies may play in the migraine process is unclear, vitamins may be important in multiple potential mechanisms, including changes in mitochondrial function (structures in cells involved in energy production), inflammatory changes that could influence pain and the sensitivity of nerve cells in the brain, Hershey told Live Science.

More work needs to be done to understand whether giving supplements to kids who have low levels of any of these four nutrients may improve migraines. The study did not evaluate the effectiveness of supplements, because the kids were given supplements and medication at the same time to prevent migraines, making it hard to tease out the effects of vitamins alone, the researchers said.

It's an interesting finding that some vitamins may play a role in migraine in kids, said Dr. Anthony Rodrigues, a pediatric neurologist at Floating Hospital for Children at Tufts Medical Center in Boston, who was not involved in the research.

However, the results show a correlation between mild deficiencies of these nutrients and kids with migraines, and they do not suggest that lower levels are a cause of headaches, he said.

There is a lack of studies that focus on whether supplements might help to prevent the frequency and severity of migraines in kids, Rodrigues told Live Science.

Although the evidence for supplementation is limited, Rodrigues said that he does suggest that some children with migraines try taking magnesium, a mineral that was not involved in this new study. Magnesium may work by helping to decrease the irritability of nerve cells that could trigger migraines, he said.

Rodrigues said he might recommend magnesium to a child with infrequent headaches, meaning they occur less than two times a week. Depending on the child's age, he typically recommends a dose of between 200 and 500 milligrams a day of either magnesium oxide or magnesium gluconate.

But the most important advice Rodrigues has for kids with migraines is to focus on three lifestyle practices to help prevent these severe headaches: Get good-quality sleep each night, exercise regularly and eat a healthy diet, and drink water and other liquids to avoid dehydration.