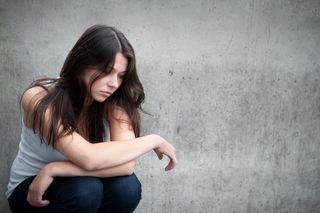 The average age of children with chronic pain is 14.
(Image: © Teen photo via Shutterstock)

Chronic pain in children and teenagers is a dramatically growing problem, with hospital admissions for youngsters with the condition rising ninefold between 2004 and 2010, a new study suggests.

The most common type of chronic pain among kids in the study was abdominal pain, which was reported in 23 percent of cases, according to the study.

Other conditions included reflex sympathetic dystrophy syndrome, characterized by nerve pain in the limbs, which affected 9.2 percent of children in the study, and chronic pain syndrome, which occurs when pain lasts longer than three months (6.4 percent). Children also reported headaches and migraines, limb pain and back pain.

"We are seeing a lot more young patients with chronic pain syndrome," said study author Dr. Thomas A. Coffelt, assistant professor of clinical medicine and pediatrics at the Indiana University School of Medicine in Indianapolis. "It is quite alarming to us."

For the study, researchrs gathered information on 3,752 children admitted to 43 pediatric hospitals throughout the United States.

The typical chronic pain patients were white and female, with an average age of 14. The average hospital stay was 7.32 days, according to the study.

The vast majority of the patients in the study received additional diagnoses while in the hospital, with an average of 10 diagnoses per child. Children were diagnosed with conditions such as abdominal pain, mood disorders, constipation and nausea. Altogether, 65 percent of patients received a gastrointestinal diagnosis, and 44 percent received a psychiatric diagnosis.

The results also showed that even after being hospitalized, many youngsters continued to have pain. Coffelt said that 12.5 percent of the children were back in the hospital within a year — 9.9 percent were readmitted at least once, and 2.6 percent more than once.

Why so many children have chronic pain is the "million-dollar question," Coffelt said.  Depression, anxiety and other mood disorders, which were secondary diagnoses in many youngsters, may play a role, he added.

Another possible cause could be physical, emotional and sexual abuse or assault, though these were associated with just 2.1 percent of young pain sufferers.

"We can't identify the underlying [cause] of pain, which is why we struggle with it," Coffelt said. "We need to find a better way to treat these patients."

"Chronic pain is quite common in pediatrics," said Gary A. Walco, director of pain medicine at Seattle Children's Hospital, who was not involved in the study.

"The chronic pain field now recognizes that a good deal of chronic pain has to do with a  change in how the brain and spinal cord are processing the stimuli coming into the body," Walco said. "This study shines a light on how poorly understood and mismanaged recurrent and chronic pain syndromes are."

However, Walco also said he believes the number of pain patients reported in the new study is "potentially artificially inflated" due to the diagnostic codes used to identify pain patients. Those codes, Walco said, "leaned in the direction of psychological issues."

The multiple diagnostic procedures and readmissions cited in the study underscore the need to do better when it comes to dealing with pain in youngsters, Walco said. Instead of treating chronic pain as an acute problem, physicians need to focus on rehabilitation, he explained.

And "rather than continuing to see pain as a symptom of another illness, parents need to recognize pain is the illness, and seek out a pain expert for treatment," Walco said.

The study appears today (July 1) in the journal Pediatrics.