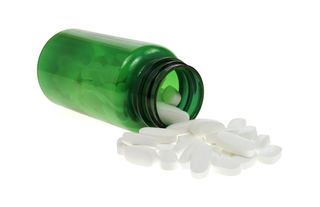 Studies show that magnesium may lower blood pressure, however, there are risks to taking the supplement.
(Image: © Magnesium supplements photo via Shutterstock)

Magnesium is the eighth most abundant element on the earth's crust, and is found in every organ in the human body. The physician Joseph Black first recognized magnesium as an element in 1755, but even before Black's time, physicians were recommending the magnesium carbonate "magnesia alba" for people with an upset stomach.

Today, researchers know magnesium plays a part in more than 300 reactions in the body. Magnesium is necessary to synthesize proteins, DNA and RNA. It plays a role in our metabolism, and cells use magnesium to transport calcium and potassium ions across the cell walls. Healthy magnesium levels are key to nerve function, muscle contraction, heartbeat, and healthy bones. Yet all of the magnesium in the average person weighs only 0.8 ounces (25 grams).

Magnesium is still used as an antacid and a laxative today. As a supplement, magnesium is touted to prevent hearing loss, kidney stones and migraine headaches. Magnesium supplements are also claimed to improve athletic performance, and treat sleep troubles including restless leg syndrome and insomnia. Low magnesium levels have been linked to osteoporosis, anxiety, irritability, depression and attention deficit hyperactivity disorder (ADHD).

Supplements can increase magnesium levels, especially those in the forms of magnesium aspartate, citrate, lactate and chloride. A 2011 study in the American Journal of Clinical Nutrition showed people who take magnesium supplements typically get more than the recommended daily amount.

The recommended daily intake of magnesium ranges from 320 milligrams to 420 milligrams, depending on age or gender.

Magnesium deficiency can sometimes cause coronary spasm, a phenomenon in which the arteries that supply blood to the heart spasm and block blood flow. Dangerously low levels of magnesium can also result in low calcium (hypocalcemia), and low potassium (hypokalemia) — which can be fatal in extreme cases. Severely low magnesium can also result in a heart attack, respiratory arrest and death.

While magnesium supplements can certainly treat a magnesium deficiency, studies also show getting more magnesium than the bare minimum may help certain conditions. Several long-term studies have found a correlation between high magnesium levels and a lower risk of heart disease, sudden cardiac death and ischemic heart disease, according to the National Institutes of Health's Office of Dietary Supplements. Magnesium may also help prevent stroke. An analysis of seven studies including more than 200,000 people found that an extra 100 milligrams of magnesium a day reduced a person's risk of stroke by 8 percent, according to a February 2012 review in the American Journal of Clinical Nutrition.

Guidelines from the American Headache Society and the American Academy of Neurology say magnesium is "probably effective" for migraine prevention. (However the guidelines recommend the nutritional supplement butterbur over magnesium to prevent migraines.)

The National Library of Medicine and the NIH determined that magnesium may help people with chronic fatigue syndrome and pain from fibromyalgia. Scientific evidence also indicates that magnesium may help PMS, high cholesterol, kidney stones, hearing loss, asthma attacks and chronic obstructive pulmonary disease (COPD). There are not enough studies to determine whether magnesium supplements could help anxiety, ADHD, hay fever, Lyme disease or multiple sclerosis, according to the NIH. Studies are less promising on magnesium's ability to boost athletic performance.

Magnesium is one of the seven major minerals that the body needs in relatively large amounts (Calcium, potassium, sodium, chloride, potassium and phosphorus are the others). But too much of one major mineral can lead to a deficiency in another, and excessive magnesium can in turn cause a deficiency in calcium. Few people overdose on minerals from food. However, it is possible to get too much magnesium from supplements or laxatives.