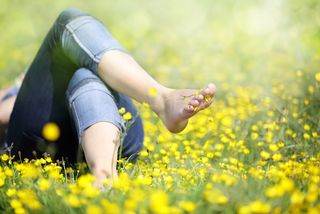 After being confined in shoes and socks or sometimes heavy boots for months, your feet probably welcome warmer weather. Come summer, people like to kick off their shoes and feel the soft grass or warm sand beneath their feet.

And although many of us go barefoot in short stints — while at the beach or the pool, for example — some make it a more regular occurrence. Take Daniel Howell, for instance. Howell, a biology professor at Liberty University in Lynchburg, Virginia, likes to walk, hike or run in his bare feet as much as possible, and has been doing this for about 10 years.

An advocate for barefoot living, Howell grew up on a farm and often went barefoot all summer long. After taking his first professional job, he found he couldn't stand wearing socks and shoes because his feet got too hot.

In his opinion, the risks of wearing shoes all the time are greater than the risks of going barefoot. He is not "anti-shoe," he just believes that going barefoot is "a more natural state of being" and "better for the body," he told Live Science.

"The shoe is useful for a particular set of circumstances," Howell said. For example, he puts on shoes when they are required, and wears them in extremely cold temperatures, or in areas where there are known hazards, such as sharp rocks or broken glass.

But Howell, who has written a book and maintains a website about going barefoot, said he has traveled to a number of places, such as London, New York City and Seattle, without taking his shoes along. [5 Wacky Things That Are Good for Your Health]

During his decade-long experience of going barefoot, Howell said he's never had a serious injury. In fact, he argues that the vast majority of foot problems can be traced to wearing shoes.

When a person regularly goes barefoot, paying attention to where and how you walk becomes second nature, Howell told Live Science. Stubbed toes, blisters and burns from hot, black pavement are some common injuries at first, but in a few weeks, tender feet toughen up and adapt, and you learn to be more careful, he said.

Barefoot in the park?

However, other experts disagree. Although some people like the freedom or feel of being barefoot, there are not too many upsides to going without shoes in public because there are a lot of hazards out there, said Dr. Andrew Shapiro, a podiatrist in private practice in Valley Stream, New York, and spokesman for the American Podiatric Medical Association.

Going barefoot not only potentially exposes feet to rusty nails, glass, thorns and bacteria, but it also causes the foot to lose some stability, support and grip, making it easier to slip, Shapiro said. A proper shoe with good support provides shock absorption for the rest of the body and reduces stress on bones and ligaments, he said.

And for people with an underlying disease such as diabetes or vascular disease, which can both cause poor circulation, going barefoot is even more of a hazard, Shapiro said. These individuals may be at greater risk of infection even if they get a small injury because healing in the foot is slowed, he said. And people who have diabetes may lack sensation in the foot, making them unable to feel something sharp if they step on it, he said.

Shapiro also said he recommends that parents not let their kids go barefoot at the park because they may step on glass or accidentally kick playground equipment.

He even advised people against going barefoot in their own yards because of not knowing what's hidden in the grass.

Although it is easier to see what's on the sidewalk, it can still be so hot that it burns skin on the soles of the feet. Pool decks can have slightly rough surfaces that are designed to preventing slipping, but can be rough on the feet, he said. [7 Common Summer Health Concerns]

Padding around a locker room or public shower in bare feet could lead someone to contract athlete's foot, a fungus that is easily transmitted in moist environments, Shapiro told Live Science.

Going barefoot on a sandy beach may be generally safe, he said, because sand can be somewhat forgiving on feet. But still, wearing some protection like a water shoe is a good idea when the sand is cluttered with shells or strewn with glass bottles, he suggested.

But without shoes, anything and everything could get into skin on the feet, especially skin that is dry or cracked, Ploch said. In addition, the feet are difficult to treat for infections, and injuries to the feet and legs can take longer to heal than injuries on other parts of the body, she said.

Ploch recommends that people don't go barefoot outside. "It's too risky and there's too much out there that people can step on," she said.

Ploch thinks that it's safe for kids and adults to go barefoot in their own homes if the flooring is suitable and no one in the household has athlete's foot. People with athlete's foot should wear flip-flops indoors, she said.

There are other infections that feet can pick up, too. For example, the same fungus that causes athlete's foot is also responsible for toenail fungus, Ploch said. Toenails that are dry, cracked and brittle can give the fungus an easy entry into the nailbed, and once there, it's hard to get rid of, Ploch said.

Plantar warts are caused by a very hardy virus that people can catch from going barefoot in public areas, Ploch told Live Science. These warts can grow inward and become painful, and can hide from the immune system's usual defenses, making them difficult to treat, she said. [Tiny & Nasty: Images of Things That Make Us Sick]

Pseudomonas bacteria can also be contracted by people going barefoot, and this infection is common in people exposed to a lot of water, such as soldiers on patrol in wet areas, Ploch said. Hookworm is a parasitic infection that can be picked up when people go barefoot in developing countries and walk on soil contaminated with feces from animals or people, although Ploch noted she has never treated any cases of it in the United States.

Howell, the barefoot enthusiast, said he is not too worried about picking up some of these infections. He figures that spending less time in close-toed shoes and socks, conditions where his feet would be in a hot, moist and dark environment conducive to fungal growth, and enjoying more time with his dry feet exposed to the sun and air is better for him.