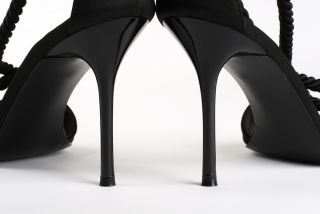 The laundry list of damage that high heels can do to your body just got longer: According to podiatrists, high-heeled shoes are one of the most common causes of ingrown toenails.

This toenail problem, which occurs when the toes are compressed so that the big toenail grows into the skin, is usually nothing more than a painful annoyance. But ingrown toenails can become infected, sometimes necessitating the removal of the entire nail.

"Ingrown toenails can be painful, but many women are willing to cope with the discomfort in order to continue wearing their high heels,"Rodney Stuck, a professor of podiatry at the Loyola University Health System, said in a statement. "However, more serious complications can arise and cause permanent damage to the toenail, if they are left untreated." [Infographic: How Heels Hurt]

Stuck suggested avoiding overly pointy, tight shoes and tight hosiery. Trimming the toenails straight across can also reduce the risk of ingrown nails. Soaking the feet in lukewarm, soapy water, drying them thoroughly and then applying a mild antiseptic can prevent infection if toenails are already ingrown.

But heels can harm more than just the toes. Research has linked high heels in youth to heel and ankle pain in older adults. One study published in October 2009 in the journal Arthritis Care & Research analyzed foot-examination data from more than 3,300 men and women and found that more than 60 percent of women reported wearing shoes with poor support, including heels, pumps and sandals, compared with only 2 percent of men. In women, wearing these shoes in the past was linked with heel and ankle pain.

Heels can even reshape the calf muscles and tendons, shortening them so that women who wear heels often may find it uncomfortable to walk flat-footed. Even ballroom dancers aren't so light on their feet when wearing heels; according to research published in 2010, dancing in heels distributes pressure toward the toes, which can lead to plantar fasciitis, the painful swelling of the bottom of the feet.

Moving up the leg, studies have also linked high heels to knee osteoarthritis, with sky-high stilettos presenting more danger than practical pumps. According to a study presented in 2010 at the annual meeting of the American Society for Biomechanics, walking in heels increases the pressure on the inside of the knee joints. Heels also alter the posture to put extra strain on the lower back, the researchers found.

It's not only heels that cause problems. Flip-flops, with their total lack of support, can change the gait, too. The result can be pain and potential long-term joint problems.

The potential for later pain may seem far away when selecting a pair of adorable heels. But according to the American Academy of Orthopaedic Surgeons, 43.1 million Americans have foot problems, which translates to one out of every six people in the country. Eight out of every 10 women say their shoes are painful, and women are nine times more likely to develop foot problems because of badly fitted shoes than are men.

Stuck recommended that women limit their time in heels, especially on days when walking and standing are in the cards. He also suggested that women outline their feet on inflexible cardboard and take the cut-out when going shoe shopping. If the cardboard can't fit into the shoe without being scrunched, neither can your feet.