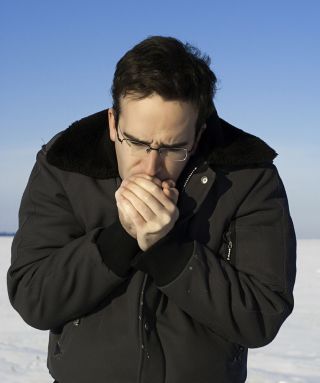 Frostbite can happen in just a few minutes or can take as long as an hour or two, depending on the temperature and length of exposure.
(Image: © dragon_fang | Shutterstock)

Frostbite is the freezing of the skin and tissue. While it may seem like just a problem that hikers or mountain climbers have to deal with, anyone can get frostbite when exposed to freezing temperatures. In fact, frostbite is the most common freezing injury, according the U.S. National Library of Medicine.

Normally, frostbite can happen in just a few minutes or can take as long as an hour or two.

"The onset/risk of frostbite is directly dependent on the ambient temperature (also taking into account the wind chill) and the length of exposure. The colder the temperature plus wind chill, the less time it takes for frostbite to occur," said Dr. Nicholas Lorenzo, chief medical officer with MeMD, a Web-based health services provider based in Scottsdale, Arizona.

Other factors come into play as well, Lorenzo explained. One is the age or size of the individual. Typically, children will experience frostbite more quickly than someone larger and older. Those with less than optimal circulation to body parts such as hands, fingers, feet or toes, or those with pre-existing conditions including diabetes, autoimmune vascular disorders or atherosclerosis obliterans (hardening of the arteries) are also more at risk of getting frostbite.

Though frostbite can affect any part of the body, some areas are more susceptible. "Any skin surface can suffer frostbite with significant cold exposure. However, the most susceptible skin areas are distal [i.e., the parts farthest away from the center of the body] and would include the hands, fingers, feet, toes, tip of the nose, face and ear lobes," Lorenzo told Live Science.

Common signs of frostbite, according to the Mayo Clinic, are cold skin and a prickling feeling in the affected area. As frostbite progresses, the area may become numb, and the person may become clumsy because of muscle and joint stiffness. The skin will change colors, according to the severity of the condition. Skin may become red, white, bluish-white or grayish-yellow, and may become hard or waxy looking.

The Mayo Clinic categorizes frostbite into stages. The first stage is called frostnip. The skin may turn pale or red, and it may feel prickly or numb. As the skin warms up, it may hurt or tingle. This stage doesn't cause any permanent damage, though.

The second stage is called superficial frostbite and is more serious. It occurs when the skin turns white or pale. At this stage, the skin may feel soft, but it may actually have ice crystals formed in the tissue, beneath the surface. The body part may also feel warm to the person with frostbite, even though the body part is still cold.  When the area is rewarmed, it may turn a mottled purple or blue and may swell, burn or sting. Within the next 24 to 36 hours, the area may develop fluid-filled blisters.

The final stage is severe or deep frostbite. This stage affects all layers of skin and the tissues beneath. The area may become numb, with no sensation of cold or discomfort. The joints and muscles of the affected area may also stop working. After the area is rewarmed, it will develop large blisters within 24 to 48 hours and the area will turn black and hard because the tissue has died, according to the Mayo Clinic.

Treatment of frostbite usually includes some type of rewarming process. According to the U.S. National Library of Medicine, those with signs of frostbite should be checked for hypothermia first, before receiving treatment for frostbite. Hypothermia is a condition that occurs when the temperature in the core of the body (as opposed to the limbs) drops to 95 degrees Fahrenheit (35 degrees Celsius) or lower. If the patient has symptoms of hypothermia, such as intense shivering, slurred speech, drowsiness or a loss of coordination, then the individual should receive emergency medical attention right away.

Those with symptoms of superficial or deep frostbite should see a doctor, but first, the patient must be moved to a warm, stable area. "If a frostbitten injury is rewarmed and then freezes again, significantly more damage can occur," Lorenzo said.

Then, the affected area should be wrapped and splinted. "Excessive movement can cause ice crystals within the tissue to cause further tissue damage," he said. According to the U.S. National Library of Medicine, toes and fingers should be wrapped separately.

Once the patient is at a medical facility, the individual's affected areas will be rewarmed. "The most common method to rewarm frostbitten tissue is to immerse the tissue in warm water at 104 to 108 F [40 to 42 C]," Lorenzo said.

Lorenzo pointed out that as peripheral tissues are rewarmed, there is a small risk of cooling of the body core, which carries the danger of cardiac dysrhythmias, or irregular heartbeat. The risk is very low unless the patient has pre-existing risk factors such as heart disease and advanced age. During treatment, the core body temperature must be monitored in at-risk patients.

The physician may order an X-ray, bone scan or magnetic resonance imaging (MRI) test to determine the severity of bone or muscle damage. Once the damage is determined, the area will be treated accordingly.

Patients with frostnip can self-treat by rewarming the body. This can be done by holding a warm cloth against the area or by putting the area into warm water.

Frostbite can be prevented with the right protection when facing cold temperatures. The American Academy of Dermatology recommends: