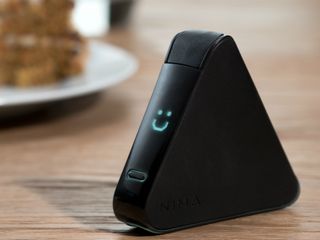 This portable gluten tester from 6SensorLabs can detect if a food has 20 parts per million or more of gluten.
(Image: © 6SensorLabs)

For people with gluten allergies or celiac disease, the idea of eating out in restaurants can be terrifying. It typically involves scrutinizing menus and food labels, interrogating waiters, or having to bring their own meals wherever they go.

But now, a discreet new device, small enough to fit into a pocket or purse, could make eating out an easier and safer experience for gluten-sensitive people.

"A lot of people who have food issues get very stressed when they're eating out, and they avoid eating out altogether," Sundvor told Live Science. "Our product will really enable them to start going out again and start being more open in social settings."

An estimated one in 133 Americans, or about 1 percent of the population, is affected by celiac disease, an inherited autoimmune disease in which eating gluten can cause severe damage to the small intestine, according to the organization Beyond Celiac. There are currently no treatments or cures for celiac disease — except eating a diet without any gluten, which is a protein found in wheat, rye and barley.

Using the Nima device, individuals can make sure their food is gluten-free by placing a tiny piece of their meal inside a disposable capsule, twisting the cap shut and inserting the capsule into the Nima's main sensor unit. Within 2 to 3 minutes, Nima will let users know if the food is safe to eat by displaying a smiley face on the screen if there is no gluten, or a frown if the result is positive for the protein, the company said.

The device can test a range of foods, from soups and sauces to more solid items like baked and fried goods, Sundvor said. Using a combination of a chemical and mechanical process, the Nima grinds down any chunky bits, dissolving the food in a proprietary blend of enzymes and antibodies that zero in on any gluten in the mix. And Sundvor said those antibodies can detect levels of gluten as low as 20 parts per million, the FDA limit for the maximum level of gluten considered acceptable in foods that are labeled gluten-free.

But the Nima itself is not an FDA-approved device. It is not intended for medical or diagnostic use, the company said. Instead, the Nima is marketed as a tool for getting more information about food when eating out, Sundvor said.

"We're selling this as a device that can give another layer of data," Sundvor told Live Science. "This isn’t something that will help people treat their disease or diagnose gluten-sensitivity, and that's why we don't need FDA approval for the device."

The Nima offers a portable alternative to current clunky, time-consuming food-testing kits on the market, Sundvor said. The device is 99.5 percent accurate, he said. That number is based on about 2,000 tests comparing the Nima's sensitivity to gluten in various foods to that of other consumer gluten tests currently on the market.

Nima's results have also been validated by two different external labs: Bia Diagnostics and BioAssay Systems. And Sundvor said his company is making sure to get the device tested even more thoroughly by a third party before making the sensor available to the public later this year.

There are still some challenges, though. Most importantly, the Nima can't guarantee that an entire meal will be free of gluten, because the tests only the portion of the meal that users place in their device, Sundvor said. If there is gluten in the salad dressing on the side of a meal, for example, and not in the crusted Parmesan chicken, the device could give a false negative if the chicken is the only part of the meal tested.

The Nima avoids cross-contamination inside the device itself by using disposable capsules. This design also allows for potential expansion into capsules for other allergies later on, with the development of dairy and peanut allergy-testing capsules already underway, Sundvor said.

Currently, users can pre-order a starter kit online, which consists of the main Nima sensor unit and three capsules, selling for $199. Refill packs of 12 capsules each will also be available on a subscription basis for $47.95 during the pre-sale. Once the device is available, in mid-2016, the company will also have a Nima app, in which users can log results and share their experiences at different restaurants, testing different foods, Sundvor said.

"This is going to have a really big impact on people," he added. "It will bring more transparency to food in general and help people with their dietary issues."