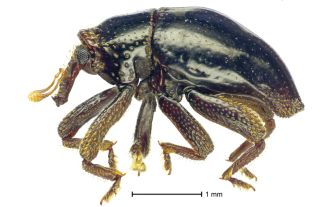 The towering and shaggy Wookiee character Chewbacca from the "Star Wars" movies has a new namesake — a tiny weevil recently discovered in New Guinea.

Though the insect is significantly smaller and much less hairy than everyone's favorite "walking carpet," dense scales on the weevil's legs and head reminded the scientists of Chewbacca's fur, prompting their name choice.

Trigonopterus chewbacca is one of four new weevil species identified on the island of New Britain in the Bismarck Archipelago in New Guinea. Discovered alongside it were the somewhat less whimsically named weevils T. obsidianus, T. puncticollis and T. silaliensis. [7 Animals with 'Star Wars'-Inspired Names]

T. chewbacca is a flightless weevil, a type of beetle typically found in leaf litter in forests. The male's body is black with hair-like structures on its antennae and legs, and measures 0.13 inches (3.34 millimeters) in length.

Previously, only one known species in the Trigonopterus weevil group had been found in this region, although prior studies described Trigonopterus weevils in New Caledonia, Samoa and Fiji. While T. chewbacca was the first species in this group that was named for a "Star Wars" character, it's not the only one with a celebrity-inspired moniker. Trigonopterus attenboroughi — described in a study published in ZooKeys in 2014 — was named for famed British naturalist Sir David Attenborough.

This isn't the first time that scientists who were also "Star Wars" fans incorporated their fondness for the Millennium Falcon co-pilot into a species name. A fuzzy Mexican moth was described as Wockia chewbacca in the journal Proceedings of the Entomological Society of Washington in 2009, and a wasp described as Polemistus chewbacca appeared in the journal Zoological Record in 1983.

Even a fairly minor (but still well-known) character named Greedo, the ill-fated bounty hunter killed by Han Solo in "A New Hope," is commemorated with a species name — Peckoltia greedoi, a flat-headed catfish that bears a striking resemblance to the peculiar-looking alien.

Study lead author Matthew Van Dam, a postdoctoral researcher with the Zoological State Museum in Bavaria Germany, told Live Science in an email that studying weevils — one of the planet's most diverse groups of insects — can help scientists better understand the environments that weevils occupy, and can inform future conservation efforts in threatened areas.

This could be especially critical in parts of the world where  the extent of animal diversity is still unknown. Scientists reported in the new study that there could be many more animal species on the island of New Britain that haven't yet been discovered, but that time would be of the essence to track them down and identify them, as palm oil plantation expansion has already claimed significant portions of land that were once covered by forest habitats.

The findings were published online April 21 in the journal ZooKeys.