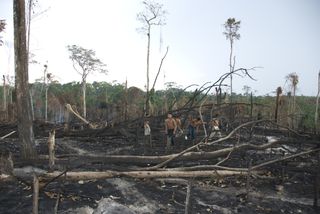 Members of the Aw&aacute tribe look over a deforested swatch of land. Illegal logging is increasingly encroaching on Awá territory.
(Image: © ©Fiona Watson/Survival)

Seth Shulman is a senior staff writer at the Union of Concerned Scientists (UCS), a veteran science journalist and author of six books. This Op-Ed, and other of Shulman's Got Science? columns can be found on the UCS website. Shulman contributed this article to Live Science's Expert Voices: Op-Ed & Insights.

It's always great to see the door crack open for progress on an issue when the parties involved start to recognize a "win-win" solution. Such a tipping-point moment is coming into view in the campaign to halt the widespread, devastating deforestation currently resulting from the growing world consumption of palm oil. It's a classic case of science and transparency shining the way forward.

The problem is far from solved, but in a major development, several large palm-oil purchasers, including Kellogg's and Hershey's, have recently pledged to buy only deforestation-free palm oil for their products. Two of the world's largest palm oil suppliers — Wilmar and Golden Agri-Resources — have made similar commitments for the palm oil they sell. Now pressure is mounting on some of the remaining hold-outs — like Procter & Gamble, Pepsi and McDonald's — to follow suit and do the right thing for the planet.

The stakes are high. To understand the issue, you need to know that palm oil, derived from the fruit of the oil palm tree, is a sought-after ingredient for thousands of products, from snack foods to shampoo. Its versatility and low cost have made it the most widely used vegetable oil in the world. But so far, palm oil's popularity has come at a terrible price: Today's conventional palm-oil production is one of the world's major drivers of tropical deforestation, wiping out habitat for endangered species and contributing to climate change.

The other piece of the problem is the corruption and lax laws in many regions that have allowed a sometimes shady network of producers to clearcut vast swaths of tropical forests to make way for palm-oil plantations. The clearing of those forests not only harms the habitat of many endangered species, it releases huge amounts of carbon into the atmosphere that those forests had formerly stored.

Oil-palm trees grow only in humid, tropical regions such as Indonesia and Malaysia, as well as parts of Africa and Latin America.

In addition to deforestation, palm-oil production has also led to the destruction of peat soils in many regions. While tropical forests store vast amounts of carbon, the peat soils on which some of these forests grow often contain some twenty times more. In fact, the peat soils in Southeast Asia store as much carbon as all above-ground vegetation in the Amazon. When these peat-rich soils are drained to make way for palm-oil plantations, the peat decomposes, releasing large quantities of carbon, and the soils become more susceptible to fire, which can emit even more carbon into the atmosphere.

Adding considerable urgency to the problem is the growing demand for palm oil. Production has more than doubled around the world in the past decade. Palm-oil plantations now cover more than 40 million acres — an area larger than the state of Georgia.

The climate implications are enormous: All told, tropical deforestation currently accounts for a whopping 10 percent of the world's total global-warming emissions — equivalent to the annual tailpipe emissions of some 600 million cars.

The good news is that tropical deforestation is not an inevitable outcome of palm oil production. Scientific analysis has shown that through a combination of efforts, such as improving yields through tree breeding and better management practices, worldwide palm oil demand can be met until 2020 without further damage to tropical forests or peat lands. This is where the "win-win" comes in.

The key is to develop transparent supply chains throughout the palm-oil market. Unfortunately, despite a variety of efforts to combat the problem, the current lack of traceability along the supply chain allows growers with a history of environmental and human rights violations to continue selling their products with no negative financial consequences. The lack of traceability and transparency also makes it all too easy for purchasing companies to turn a blind eye to where their palm oil is coming from and how it has been produced.

To break the cycle, companies need to commit to buying only traceable, deforestation-free and peat-free palm oil, and consumers need to demand that they do so. Without pressure from the public and the global marketplace, the existing network of producers are unlikely to adopt sustainable practices on their own.

To help accelerate this change, the Union of Concerned Scientists (UCS) recently released a scorecard grading the palm-oil sourcing commitments of 30 top companies in the packaged food, fast food and personal care sectors.

The report shows that six companies — including L'Oréal, Nestlé and Unilever — have already committed to purchasing palm oil that is deforestation-free, peat-free, traceable and transparent. These companies have demonstrated that it is possible to make popular, profitable consumer products while safeguarding tropical forests. Many other companies, however, have yet to make similar commitments.

Among the most important laggards:

The UCS's report makes the case that, as a consumer, you can help drive this change by demanding that the companies whose palm-oil products you use adopt deforestation-free, peat-free palm-oil policies for all their products.

"Multinational companies really hold the world's tropical forests in their hands," said Calen May-Tobin, lead analyst for UCS's Tropical Forest and Climate Initiative. May-Tobin says his organization has worked with a number of companies to help them develop more sustainable policies and will be watching to make sure they follow through.

"With recent commitments from Kellogg's and Hershey's to use only traceable, deforestation-free palm oil, we see some exciting momentum building," said May-Tobin. "Companies have a great opportunity right now to transform their industries while doing something that can save tropical forests and help limit the severity of climate change. And consumers have a big role to play by calling upon these companies to take action now."

Shulman's most recent Op-Ed was "Why a Climate Scientist's Libel Case Matters." This Op-Ed, and other of Shulman's Got Science? columns can be found on the UCS website. The views expressed are those of the author and do not necessarily reflect the views of the publisher. This version of the article was originally published on Live Science.