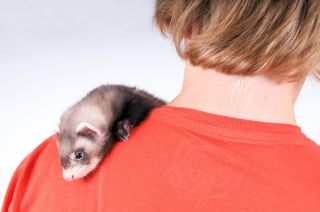 Ferrets are the third most popular pet, according to the American Ferret Association.
(Image: © zandyz | Shutterstock )

A ferret is a small, furry creature with a cone-shaped nose, long tail and a long, pear-shaped body with short legs and long claws. Ferrets are related to wolverines, ermines, minks and weasels in the Mustela genus. They are popular, though often controversial, pets.

The vast majority of ferrets are the domesticated variety. Experts think they were bred more than 2,500 years ago from either European polecats (Mustela putorius) or steppe polecats (Mustela eversmanii). These polecats should not be confused with skunks, which are sometimes colloquially called polecats. There are no naturally wild domesticated ferrets. If a pet ferret escapes, it rarely survives more than a few days, according to the American Ferret Association.

However, there is a wild species called the black-footed ferret (Mustela nigripes). These creatures are rare — North America's rarest mammal, according to the University of Michigan's Animal Diversity Web (ADW) — and they are considered endangered by the International Union for Conservation of Nature (IUCN).

The domesticated ferret can be born with a wide range of fur colors, including dark-eyed white, sable, black sable, silver, albino, cinnamon and chocolate. Black-footed ferrets aren’t nearly as colorful. They are a pale color with white foreheads, muzzles and throats and black feet.

Black-footed ferrets once roamed North America, making their homes in grassy areas. As recently as the 1970s, black-footed ferrets were considered extinct, but 120 were found in Wyoming in the mid-1980s. Unfortunately, two disease outbreaks wiped out most of the remaining population, and the last 18 were captured for a breeding program. In 2006, the offspring of those 18 were released in eight reintroduction sites in the United States and Mexico, where they are making a comeback, according to the Arizona Game and Fish Department.

These animals are true recyclers. They make their homes from old prairie dog tunnels and the burrows of other animals. Each black-footed ferret requires around 100 to 120 acres (40 to 49 hectares) of living space to find adequate food, according to the ADW.

Domesticated ferrets usually live in cages, but need at least four hours per day to run outside of their cages. They also thrive in temperatures that are between 50 and 80 degrees Fahrenheit (10 to 27 degrees Celsius).

Black-footed ferrets get moving around dusk as they are nocturnal creatures. They live and roam alone, spending their nights hunting for prey. Ferrets have very good smell, sight and hearing. They make chattering or hissing noises when they are frightened. During the day they sleep. During the winter, ferrets will stay underground for up to a week at a time.

Domesticated ferrets are very friendly and will adjust their sleeping schedule to their owner’s. They love to sleep, though, and will slumber up to 18 hours.

Ferrets are carnivores, which means they eat only meat. Black-footed ferrets eat usually eat small mammals, such as possums, rabbits, prairie dogs, hedgehogs and rodents. They supplement their diet with amphibians, birds, bird eggs, fish, reptiles, invertebrates and carrion, according to Woodland Park Zoo In Seattle, Washington. Black-footed ferrets usually consume between 1.7 to 2.4 ounces (50 to 70 grams) of meat per day.

A domesticated ferret typically eats factory-made chow. A healthy diet for pet ferrets consist of 36 percent protein, around 20 percent fats and is low in carbohydrates, according to the American Ferret Association.

Kits stay in their burrow with their mother for around 42 days, according to the ADW. When autumn comes, the young ferrets leave their mother and become independent and at around a year old they are mature enough to have their own litter. In captivity, ferrets live around 12 years.

The exact classification of ferrets is confusing, according to the Woodland Park Zoo and other sources. Fossil evidence is scarce and DNA tests have been inconclusive in figuring out the ferret's family tree. Usually considered a subspecies of the European polecat, ferrets are often listed as Mustela putorius furo. But according to the California Department of Fish and Wildlife, some experts use Mustela furo, Putorius putorius furo and Putorius furo. The International Commission on Zoological Nomenclature has recommended the name Mustela furo, but the name has not been approved.

Here is the taxonomy of ferrets according to the Integrated Taxonomic Information System (ITIS), which is a partnership of several U.S. agencies created to provide reliable information on species names and their hierarchical classification:

The IUCN's Red List of Threatened Species categorizes black-footed ferrets as endangered. There are currently only around 206 mature adults in the wild and their population is decreasing. This is due greatly to the prairie dog population decline since prairie dogs are a major food and shelter source for wild ferrets.

The ancient Greeks probably domesticated ferrets about 2,500 years ago to hunt vermin, according to the Woodland Park Zoo. The practice then spread across Europe. Sailors kept ferrets on ships to control rats. It is likely that that is how ferrets came to North America in the 1700s.

By the 1800s, ferrets were commonly used as pets, and often given as gifts to visiting heads of state. But in the 1900s, harkening back to ferrets' original purpose, the U.S. Department of Agriculture promoted their use for rodent control in barns and warehouses; thousands of ferrets were imported. The practice died out with the introduction of chemicals to exterminate the pests, and ferrets once again became regarded more as pets.

Some states restrict the importation and possession of ferrets, according to the American Ferret Association. In California, Hawaii and the District of Columbia, ferrets are illegal as pets. Other states have strict regulations about possessing, importing, selling, neutering and vaccinating ferrets.

A group of ferrets is called a "business."

Ferrets have a light musky odor, according to the American Ferret Association. In fact, the Latin the species name for the domesticated ferrets is smelly weasel: Mustela = weasel and putorius = smelly. Spaying or neutering minimizes the smell. They also have scent glands, which release a scent as a defense.