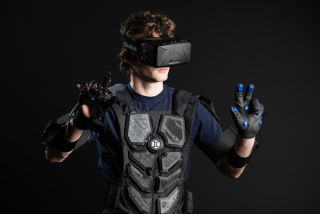 Virtual reality could one day incorporate all the senses, creating a rich and immersive experience, but existing virtual reality headsets only simulate things you can see and hear. But now, a group of engineers wants to help people "touch" virtual environments in a more natural way, and they built a wearable suit to do just that.

Designed by Lucian Copeland, Morgan Sinko and Jordan Brooks while they were students at the University of Rochester, in New York, the suit looks something like a bulletproof vest or light armor. Each section of the suit has a small motor in it, not unlike the one that makes a mobile phone vibrate to signal incoming messages. In addition, there are small accelerometers embedded in the suit's arms.

The vibrations provide a sense of touch when a virtual object hits that part of the body, and the accelerometers help orient the suit's limbs in space, the researchers said. [Photos: Virtual Reality Puts Adults in a Child's World]

When the suit is connected via a cable to a computer, it links to a virtual reality (VR) headset, such as the Oculus Rift or HTC's Vive. The suit also shares data with a motion-tracking system — the current version connects to a Microsoft Kinect, but any system will do, according to Copeland.

The combination of motion-tracking and accelerometers means that it doesn't matter if your arm is out of view of the camera because the program generating the virtual environment will "know" where your hand is and can calculate where it is most likely to be, based on how long your arm is and what the accelerometer tells the device about how your hand is moving.

With that information, a virtual environment can show a tree branch, for example, and tell the suit to vibrate in the spot where it would touch if it were hitting your side or if you were touching it with your hand, the researchers said. It can also set up virtual walls that you could feel. This way, when you are walking around in your virtual environment, you won't accidently bump into a real wall or trip over your coffee table.

"The real issue is when you use controllers to move in a virtual reality space — it doesn't correlate to movement," Copeland told Live Science. "The tracking component lets you get out of the chair and walk around."

Another issue with existing VR headsets is that some cause motion sickness and nausea. Incorporating the sense of touch could help with this problem, the researchers said, because what a person sees in the virtual environment will match up better with what they perceive with respect to their bodies. (This is one reason people get seasick — the boat is moving but the horizon isn't, and this disconnect makes some people feel ill).

Still, it will be some time before these VR suits make their way onto store shelves, the researchers said. Copeland, Sinko and Brooks founded a company called Nullspace VR, which has received some funding from prize money and via the Y Combinator fellowship, but the engineers will need additional money to actually build the devices, Copeland said. [Best Apps for Virtual Reality Newbies]

There is some skepticism among industry-watchers about whether virtual reality technologies will truly take off. In the 1990s, it was de rigueur to build virtual reality headsets, but none of those systems ever found widespread use. The problem was twofold: computing power simply wasn't up to the job of recreating a whole simulated environment, and there wasn't much a VR headset could do that was a big improvement for existing video games at the time.

A similar phenomenon happened with Nintendo's Wii video game console, which was introduced in 2006, and the Kinect, which launched in 2010. Both systems received a lot of fanfare and the Wii initially sold well. But, a decade after its launch, Wii sales have slowed, increasing only a fraction of a percent quarter-over-quarter, according to figures from Nintendo's earnings reports. Microsoft announced in January 2015 that it would retire the Kinect for Windows. In Kinect's case, the problem was a lack of software that used the system effectively, and in many instances, people needed to move furniture around the living room in order to accommodate the tracker's field of view.

To avoid the "gimmick" problem, Copeland said Nullspace is making the VR sets available to developers first, to make sure that there is content that could make use of its capabilities.

Copeland said he is confident, though, that once VR headsets like the Oculus Rift and Vive are widely available, the experience will drive users to buy Nullspace's VR suits as well. Already, when users have tested out the suit, "[p]eople are so impressed… they're like instant converts," Copeland said.