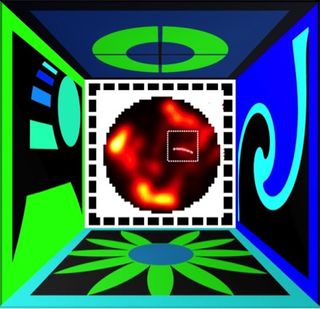 Top-down view of a rat in a virtual reality maze with four blue-green walls; neuron activity is overlaid over the rat's trajectory.
(Image: © Mayank Mehta)

Virtual reality is a growing technology used in everything from video games to rehab clinics to the battlefield. But a new study in rats shows that the virtual world affects the brain differently than real-world environments, which could offer clues for how the technology could be used to restore navigating ability and memory in humans.

Researchers recorded rats' brain activity while the rodents ran on tiny treadmills in a virtual reality setup. In the virtual world, the animals' brains did not form a mental map of their surroundings like the ones they form in real-life settings, the study showed.

"We are using virtual reality more and more every day, whether for entertainment, military purposes or diagnosis of memory and learning disorders," said Mayank Mehta, a neuroscientist at the University of California, Los Angeles. "We are using it all the time, and we need to know … how does the brain react to virtual reality?" [See video of rats in virtual reality]

Scientists have found that brain cells act as a positioning system, by creating a mental map of an environment from visual input as well as sounds, smells and other information. The discovery of these "GPS cells" was awarded the 2014 Nobel Prize in physiology or medicine.

Virtual reality creates an artificial environment, but does it activate a mental map the same way as the real world does? To find out, Mehta and his colleagues put rats on treadmills in a 2D virtual reality setup.

"We put a tiny tuxedo or harness around the rodent's chest," Mehta said — the rats are "swaddled like a baby, and a giant IMAX kind of screen goes all around them."

While the rats were exploring the virtual room, the researchers used tiny wires (50 times thinner than a human hair) to measure the response of hundreds of neurons in the animals' brains.

They recorded signals from a brain region called the hippocampus, known to be involved in learning and memory, while the animals explored the virtual room. Alzheimer's disease, stroke and schizophrenia all cause damage to the hippocampus, which interferes with people's ability to find their way in the world.

The researchers compared the brain activity in the virtual room to that measured while the animals explored a real, identical-looking room. When the rats were exploring the real room, their GPS neurons fired off in a pattern that produced a mental map of the environment. But to the researchers' surprise, when the rodents were exploring the virtual room, the same neurons fired seemingly at random — in other words, no mental map was being formed, Mehta said.

The researchers checked to see whether something was wrong with the rats or the measurements, but found nothing, Mehta said.

Yet, when the researchers took a closer look at the brain activity of the rats in virtual reality, they found that the signals weren't quite random. Instead, the brain cells were actually keeping track of how many steps the animals took — like a pedometer, Mehta said.

"We think the brain on its own behaves like a pedometer," but turns it into a map of the space by using other cues, such as smells, sounds, memory, he said.

Mehta has a hunch that the way the brain makes a map of space is the same as the way it remembers anything. For example, if someone tells you to remember a random sequence of numbers, it would be very difficult. But if it were part of a song, you may remember it more easily.

"Our brain is very good at picking something up if it comes from different [senses]," Mehta said. So when the brain makes a map of space, in addition to visual information about the scene, it takes into account smells, sounds and other aspects of the environment, he said.

The current study was only in rats, but Mehta thinks human brains probably respond similarly to virtual reality. Previous studies have shown that people with hippocampus damage in virtual reality setups don't form clear mental maps. Before, scientists didn't know if the map was poor because of the participants' brain damage or because of the virtual environment, but the current findings support the latter, Mehta said.

Detailed findings of the study were published Nov. 24 in the journal Nature Neuroscience.