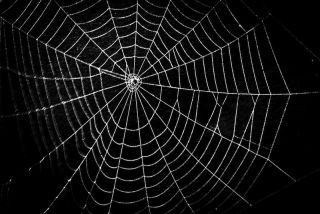 Ultra-strong spider silk, one of the toughest known natural fibers,  could one day protect soldiers on the battlefield from bullets and other threats, one company says.

Spider silk is light and flexible, and is stronger by weight than high-grade steel. Its potential applications span a wide range of industries, from surgical sutures for doctors to protective wear for the military. But producing and harvesting enough spider silk to make these types of products commercially available has posed a challenge.

"Spider silk in nature has truly unique properties. If you think about a spider's web, it's designed by nature to intercept an airborne missile — a fly or another flying insect," Kim Thompson, CEO of Kraig Biocraft Laboratories, told Live Science.

The silk naturally elongates and absorbs the energy of the captured prey, he added. "If you do the mathematical calculations — the weight of the fly, its speed, and the size of the individual fiber you capture it in — the strength-to-weight ratio is off the scale," Thompson said.

For soldiers in particular, spider silk could provide a new type of protection beyond than the traditional, solid Kevlar vest.

Thompson has been working on this idea for about 10 years, since he watched other companies try, and fail, to make silk a viable material for armor.

He said that past projects, including one that used goat milk to enhance the spider silk, lacked a key ingredient: repeatability. By contrast, if one silkworm could be genetically engineered to make spider silk, its descendants could carry on that trait forever, Thompson said. Unlike spiders, silkworms are able to assemble silk proteins that are already being used for mass production of silk fiber for clothing.

In 2011, scientists who are part of the Kraig advisory board published a paper in the Proceedings of the National Academy of Sciences about genetically engineered silkworms that spin a type of composite spider silk.

Here's how the process works today: Scientists take a DNA sequence from a spider, zeroing in on a protein that produces spider silk. Proteins are molecules constructed from amino acids (biological building blocks) that perform functions in cells, such as healing wounds.

The protein is modified, then "coded" chemically to have a type of biological on and off switch. When the silkworm reaches a certain point in its development, the protein switches on, and the silkworm is ready to spin silk.

The new gloves (created in collaboration with Warwick Mills, a New Hampshire-based firm that develops protective textiles and coatings) represent a big step for Kraig, Thompson said. The engineers weren't sure if the machinery they had constructed to knit the gloves would work.

"This was a real nail-biter for us," he said. "If it didn’t work, we'd need all new machinery to process this material. It would set us back several years."

Once production is up and running, Thompson estimates it will cost less than $68 per pound ($150 per kilogram) produced to make the silk. A competing method using E.coli bacteria costs more than $61,800 per pound ($130,000 per kilogram) of silk produced.

The company's first target is the consumer silk market, which Kraig estimates is worth $5 billion each year worldwide. Consumer clothing using a stronger silk could be available as soon as 2015, Thompson said.

While Thompson said he couldn't yet speculate on when the military might start using bullet-resistant garments, he said a natural first step would be to provide undergarments for the military made from material that is stronger and tougher than silk.

Kraig is already trying to identify what weaves could serve that purpose, with the ultimate goal of looking at the ballistic market. In fact, the company plans to first showcase underwear and other garments where stronger silk would likely be a benefit because it is less likely to tear.

Eventually, however, Kraig hopes to outfit soldiers with this modified spider silk. "There is no question we have our eye on the potential for ballistic projection," Thompson said. "It's a huge market, and a sexy market."