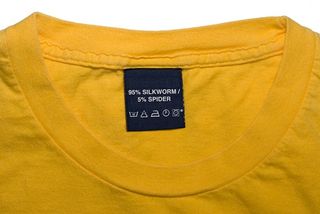 Think of it as softness blended with strength: One research team has genetically engineered a silkworm that spins cocoons composed of about 95 percent silkworm proteins and 5 percent spider silk proteins. The composite silk is significantly stronger than regular silkworm silk and, researchers hope, as easy to produce in large quantities as regular silk.

The research team reported on their results from two genetically engineered silkworms in this week’s issue of the journal Proceedings of the National Academy of Sciences.

Spider silk’s strength, lightness and flexibility make it an appealing material for sutures, artificial ligaments and tendons, bulletproof vests and more. So far, however, nobody has been able to harvest enough spider silk for practical use.

One problem is that people can’t farm spiders. The animals are territorial and, if kept in close quarters, have a tendency to eat each other. To get spider silk without cannibalizing spiders, several research teams have engineered cells and even goats to produce spider silk proteins. But that leads to a problem: how to spin that protein into large quantities of silken threads.

“All of those platforms allow for protein production, but then they have to find a way to transform those proteins to fibers,” said Donald Jarvis, a biologist at the University of Wyoming who led the research on the silkworm-spider blend.

Jarvis decided to recruit some docile natural silk-spinners to help him. “It seemed to me that the silkworm was the way to go because they naturally spin fibers,” he told InnovationNewsDaily.

Silkworms create large, fluffy cocoons, and for centuries people have grown them and harvested their silken wrappings to weave into fabric. Jarvis’ research team introduced a synthetic spider silk gene into silkworms’ silk-spinning glands. The gene included portions that code for elasticity and strength, and it was sandwiched between pieces of silkworm genetic material, which created a composite fiber that mixed the inserted gene’s material with the silkworm’s own product.

Jarvis’ team isn’t the first to get silkworms to spin part-spider silk, but it is the first to create a fiber significantly stronger than silkworm silk alone. The best fiber they created is about 48 percent stronger than regular silk and has about 61 percent the overall strength of dragline spider silk, which is the strongest silk that spiders make, said Randolph Lewis, a biologist at Utah State University who worked on the new composite. Spiders use dragline silk for the frameworks of their webs and for catching themselves when they fall, and it’s the type of silk that scientists are most eager to reproduce.

The team is now working on creating genetically engineered silkworms that can spin silk with a higher percentage of spider material, Jarvis said. That should mean an even stronger material that comes closer to mimicking spider draglines.