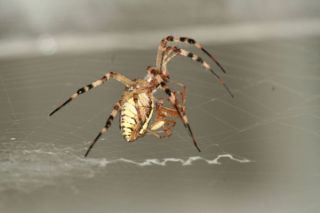 A female and a male wasp spider during a sexual encounter. Males are far smaller than females.
(Image: © Jutta Schneider.)

The unkind act of butchering and eating your mate after sex, typified by the female black-widow spider and praying mantis, may make for healthier babies, new research suggests.

The researchers found that a male orb-web spider makes the ultimate evolutionary sacrifice: giving his life for the health of his offspring.

Sexual cannibalism is the act of one partner eating the other after sex. In the orb-web spider Argiope bruennichi, the female tries to grab and wrap up the male at the onset of mating so she can snack on him during sex. In the lab, only about 30 percent of the males survive their first mating, but by letting the female gnaw on them, the males prolong the sex act, making it more likely they will inseminate their partner.

Of these survivors, half go on to find a second mate, while the others try again for the same female. Due to the male's anatomy, two copulations is the limit. (When you are facing a life without sex, is it really worth it to go on?)

"Two main hypotheses explain the evolution of sexual cannibalism," study researcher Klaas Welke, of the University of Hamburg in Germany, told LiveScience in an email. The males might be offering themselves up "to gain access to mating opportunities and to prolong their mating duration." Or, Welke said, it could be a "paternal investment into their own offspring, and they provide females with nutrients."

In the case of the orb-web spider, males tend to be much smaller than their mates; in this species, they're only one-tenth as heavy, and researchers weren't sure how much nutritional benefit the females can gain from such pipsqueak partners.

To see if eating their mates gave female spiders a nutritional advantage, the researchers divided the female orb-web spiders of their laboratory collection into three groups, allowing them to mate with one, two or three males. Half of each group of females also was allowed to eat their mates, while in the other instances, the researchers reached in and saved the male from his partner's clutches.

They then analyzed each female's eggs and resulting offspring. They counted and weighed the eggs and monitored how many offspring survived simulated cold-weather scenarios — about 46 degrees Fahrenheit (8 degrees Celsius) — and a 20-week stint of starvation.

The researchers thought that perhaps the nutritional bonus from multiple mates and meals would have an impact on females. It didn't. "We were surprised, because we had expected that any effect of male consumption would increase with every additional male consumed," Welke said.

What they did see, however, was that any cannibalism led to healthier offspring that survived better and had bigger eggs.

"Our findings suggest a paternal investment of males into their offspring," Welke said. "Sexual cannibalism may increase male reproductive success and may be very beneficial in a species with a high paternity insurance and a low rate of polyandry as found in Argiope bruennichi."

The study is published in the January 2012 issue of the journal Animal Behaviour.