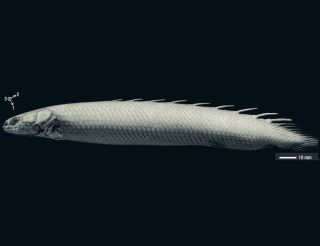 A skeleton of a dragon fish, which has inspired designs for innovative biomimetic body armor for humans.
(Image: © Julian Humphries, Amy Balanoff and Digimorph.Org)

CAMBRIDGE, Mass. — Human body armor has come a long way since the steel-plated suits of the Middle Ages, but protective animal structures — such as some shells and scales — still beat the most sophisticated man-made gear in terms of mobility and rigidity.

Researchers at MIT are now using 3D printing to bring humans up to speed with their animal kin by studying some of the sturdiest forms of animal armor, particularly fish scales, to design gear that matches the flexibility, comfort and durability found in the natural world.

"We want to understand how the scales interact with each other to provide mobility, but then also how the scales, at a global level, provide structure, rigidity and flexibility at the same time," Swati Varshney, a graduate student at MIT, told LiveScience during a symposium on smart clothing here at Harvard University on Nov. 15. [Biomimicry: 7 Cool Animal-Inspired Technologies]

Such bio-inspired armor — also called biomimetic armor, because it mimics nature — has existed for years, even dating back to the Roman Empire, when soldiers wore scaly metallic garb reminiscent of fish or amphibian skin. But recent advancements in 3D printing now allow researchers to mimic, more closely and effectively, these natural structures by creating larger-than-life models of scales and conducting nuanced mechanical tests that identify the specific internal structures that make them so protective.

MIT materials scientist Christine Ortiz and her team have focused their ongoing analyses on the Senegal bichir (Polypterus senegalus) — a hard-scaled, roughly 14-inch-long (36 centimeters) fish that is also known as a dragon fish for its slender body and spiky dorsal fins.

To study the dragon-fish scales — which are made almost entirely of natural ceramic — the team first detaches samples from a live fish, Ortiz explained during a symposium lecture. The scales are so hard that the team must use a power saw to remove them, but the fish is not harmed and grows back new scales within several weeks, Ortiz said.

The team then examines the scales using microscopic imaging and 3D scanning, and ultimately creates 3D-printed models — blown up more than 10 times the natural scale size — to conduct mechanical tests that would otherwise be extremely difficult to perform on the real, and much smaller, scales. [Infographic: How 3D Printers Work]

In their imaging analyses, the team has found that dragon fish scales have smooth ridges and corresponding indentations that allow neighboring scales to fit snuggly together like puzzle pieces. The exact arrangement of the scales varies across the body depending on the range of motion required in different regions, Ortiz said. Such variations can help inform how armor can be tailored to the human body to protect regions of high mobility, such as elbows, versus those of lower mobility, such as forearms.

The physical composition of the ceramic scale also contributes to its durability, the team found: The ceramic endures cracks in such a way that the energy dissipates inward, rather than radiating outward as other brittle materials do.

"What nature does, in many cases, is it suppresses radial cracking in ceramics, and instead, it basically cracks in a circle right around the impact," Ortiz said during the lecture. "Instead of cracking outward, it actually goes inward, dissipating energy to stop the penetration without sacrificing the structural integrity of the entire system."

The team will use their results to test the structural limits of different combinations of materials and designs, with potentially wide-ranging applications. The work is funded, in part, by the U.S. Army, so they expect their results to have some military applications but also hope to expand to other realms of human protection as well. For example, scaly armor made from heat-resistant materials, such as ceramic, could provide thermal protection for firefighters, or lighter-weight material could be configured to create flexible neck guards for football players, Varshney said.

"Our aim is enabling user mobility," Varshney said. "After we solve that, then we can start talking about durability, and the durability of different systems is going to be driven by the materials that you use in them."

In addition to their dragon-fish studies, the team is analyzing the structures of other armored fish, including the three-spined stickleback and armored catfish, in order to compare different natural systems and ultimately pick and choose sets of qualities most suitable for human protection.