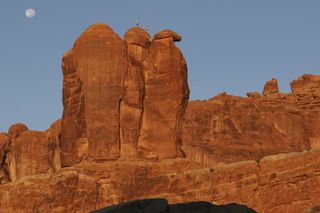 Redford, an Academy Award-winner, narrates the new film presents a sweeping bird's-eye view of the diverse and untamed national parks. Moviegoers will soar over red-rock canyons, dash down mountain peaks and explore spectacular parks across the country, or at least feel like they have after the show.

"This new film is a celebration of the 100-year anniversary of the National Park Service and a reflection on what wilderness means to us all," the American Museum of Natural History (AMNH) in New York City said in a statement. [See Breathtaking Photos from the 'National Parks Adventure' Movie]

Thirty national parks grace the big screen in "National Parks Adventure," which follows the explorations of adventurers, including mountaineer Conrad Anker, photographer Max Lowe and artist Rachel Pohl. The movie, captured on IMAX 3D cameras, is produced by MacGillivray Freeman Films, a company that's made more than 35 IMAX films, including the 1998 blockbuster "Everest."

Though Yellowstone and Yosemite are some of the darlings when it comes to national parks, the country is home to nearly 84 million acres (339,936 square kilometers) of such parks — an area almost the size of Germany.

The effort to conserve continues today. In President Barack Obama's 2017 budget request to Congress, he includes $1.6 billion for the U.S. Fish and Wildlife Service (FWS). The service manages outdoor recreation programs and conserves wildlife and ecosystems across the country, including those in the national parks, according to the FWS. This figure is $54.5 million more than was appropriated for 2016, the FWS added.

The film will show through Sept. 1, 2016, at the AMNH's 2D and 3D theaters. Check your local science center or theater to see whether "National Parks Adventure" is playing in your city.